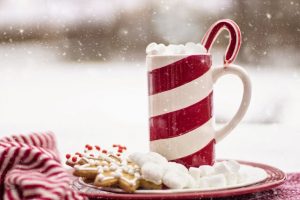 Good Morning again. I am running a crazy, holiday marathon of my own, kicking myself for not being more organized – which was my intention weeks ago – and being done with all but the baking so I could actually enjoy the rest of the season.  Yet, here I am – the 13th of the month and the gifts aren’t even completely purchased, none of them are wrapped, the cards aren’t in the mail, the baking isn’t done, and the household chores have seriously suffered from neglect.  As a result, here once again, rather than taking the time to go through all the miscellaneous celebrations, I am sharing a Christmas Tradition with you, since seriously, it’s Christmas time. What could be more important than this, right?

I love candy canes.  Truth be told, I enjoy them all year long!  We decorate our trees with them, we put them in the stockings that we hang by the chimney, but do we put any thought into where this tradition started? Well, I found out a little bit for us.  The Christmas Candy Cane was born in Germany about 250 ago, but it didn’t start out striped or crooked like we see now.  Their first appearance was a straight, white sticks of sugar.  The way the story goes, a choirmaster in 1670 was concerned about the children sitting quietly through the long Christmas nativity service, so he gave them something to eat that would keep them quiet.  He wanted to remind them of Christmas and the reason they were sitting so quietly, so he made them into a “j” shape, something like the crook on a shepherd’s staff, to remind them of the shepherds that visited the Baby Jesus at the first Christmas.  The earliest written record of actual candy canes isn’t found until over 200 years later, so this story, even though it’s very nice, might not be true.  I actually would like to think that it is, because it is so sweet! (no pun intended) It is said that around 1900 the red stripes were added to the candy sticks and they were flavored with peppermint or wintergreen.  It isn’t mentioned why, but I imagine it was because not only did it taste good, but it was good for fresher smelling breath. I can’t imagine with dental hygiene being what it was back then that everyone had the sweetest smelling breath in the first place.  Not that this sugar was going to help the teeth, but it would help the aroma for sure.  The crook, or J, on the candy came to also represent the J in Jesus, the white represents the purity of Jesus Christ and the red stripes have come to represent the blood He shed when He died on the cross. The peppermint flavor can represent the hyssop plant that was used for purification in Bible times. I have no idea what hyssop smells like, so I suppose it could be, if it smells minty.  Around 1920, a man by the name of Bob McCormack from Georgia started making canes for his family and friends, and when they became very popular, he started his own business that he called Bob’s Candies.  His brother-in-law, who was a Catholic priest by the name of Gregory Harding Keller, invented a machine that was called the “Keller Machine” that made turning straight candy sticks into curved candy canes automatically.  I’m always amazed by how inventive they were in industrializing these things!  In 2005 Bob’s candies was bought by Farley and Sathers, but they still make candy canes.

I need to head off to work – Woohoo for Friday!!! God bless you and I’ll see you soon.