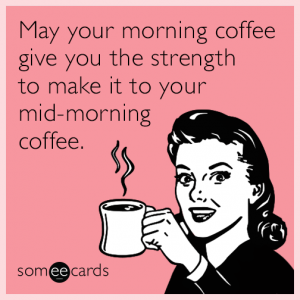 Yesterday I told you I was feeling discouraged about the job search, and today the Verse of the Day just soothed my heart. I’m still concerned about the situation, of course, but I feel a lot more peaceful after reading the verse and praying about it. Answers will come, a job will happen, but in the meantime, I know He is watching out for me and the right job will happen in the right time. And great news! It’s a much cooler day! Yesterday was somewhat cooler, but today is downright wonderful! I had to put on long sleeves, which is AWESOME!

[The Lord says] “Do not fear, for I am with you; do not be dismayed, for I am your God. I will strengthen you and help you; I will uphold you with my righteous right hand.”
—Isaiah 41:10

Fear saps our will power and leaves us feeling depleted and hopeless. Yet very few of us have ever experienced a defeat so complete and bitter as the one God’s people faced when Isaiah shared this message of hope. The preservation of Israel through their horrors to the time of Jesus, the resurrection of Jesus from the dead when all appeared lost, the triumph of the Church through centuries of persecution and opposition are all powerful reminders that underneath us are the everlasting arms of a mighty and loving God who will ultimately bring us to share in his eternal victory.

When I look at my list of organizational things that need to happen around here, I feel overwhelmed. Even having time off from working doesn’t help. I walk into the room that needs to be cleaned up and start feeling like I cannot breathe. Baby steps – that is the only way to do it. Yesterday I tackled the spice cupboard to get rid of all of the old stuff that had lost any ability to season the food, and about a paper grocery bag of spice jars and bottles that were ready to go after dumping out the old spices. Even with all of that, my cupboard is so full! I know that everything in there is good though, and since we do love to cook, there’s never a shortage of spices. It used to be worse though – I got these little organizers to put in the bottom shelves and they really help with all of the smaller bottles. Baby steps. Yesterday the spice rack, so now I need to figure out what to tackle today. What holds you up when you know you have a lot that needs to be done, and what do you do to push your way through it? 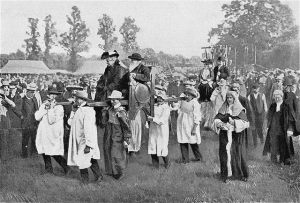 Flitch Day – This one has been traditionally celebrated on June 20th, but the tradition was revived on July 19,1854 after not having had it for 103 years. Technically it is celebration OFFICIALLY every Leap Year. love history, and I love discovering cultural celebrations and traditions that I didn’t know about. I hope you feel the same. Today we learn about the History of the Dunmow Flitch Trials. I guess the first thing we need to know is what is a flitch of bacon? Well, a flitch of bacon is basically a side of pig cut lengthwise. Now that we know THAT, the rest of this may make a little more sense. The Dunmow Flitch Trials date back to 1104, at the Augustinian Priory of Little Dunmow, which was founded by Lady Juga Baynard. Lord of the Manor, Reginald Fitzwalter and his wife dressed themselves as humble folk and begged the blessing of the Prior one year and a day after they were married. The Prior was very impressed by their devotion and gave them a Flitch of Bacon. Fitzwalter revealed to the Prior who he really was and gave his land to the Priory on the condition that a Flitch would be awarded to any couple who could claim they were just as devoted to their marriages as were the Fitzwalters. The custom was that the couple had to prove – though there isn’t any record I could find out about HOW they proved – that they were completely devoted to each other. At the end of the trials they would kneel on pointed stones – very painful – used by the devout. The purpose I must assume was to receive a blessing? Not sure, but it sounds reasonable. Following being declared recipients of the Flitch, they would be carried around in a special chair, and celebrated. There wasn’t just one winner, any couple who could prove true devotion, and they hadn’t wished themselves not married in the past year and a day since they were married, could win. The couples who were not awarded the Flitch had to follow those who did around as they were being carried in the celebration chair, I guess to show their shame or status as losers? By the 14th century the Dunmow Flitch Trials had become famous far and wide. The author William Langland mentions the trials in his book ‘The Vision of Piers Plowman’, written in 1362. The way he mentioned it implied that it was generally known amongst his readers what the trials were all about. Chaucer, less than half a century later, alluded to them in ‘The Wife of Bath’s Tale, and since he didn’t feel the need to explain what they were to his readers, historians concluded that they knew about them already. It was not until 1445 that the winners of the Flitch were recorded officially, with the earliest record of a successful claimant to the trials being Richard Wright, who traveled from Norwich to try his marital harmony, and take home the bacon. This win is recorded in the documents from the Priory of Little Dunmow, still held by the British Museum. After the monasteries were swept aside by King Henry VIII, the awarding of the Flitch was taken over by the Lord of the Manor in 1701, the local paper records different judges presiding over the trials, spending the evening after the trials dancing and playing cards. Sadly, in 1832, the Steward of Little Dunmow, George Wade, refused the request by a local couple to hold a trial and it was reported that he said he regarded the Trials as being “an idle custom bringing people of indifferent character into the neighborhood”. The trials at this point were moved from Little Dunmow to Great Dunmow. Over the following years the custom lapsed, the pointed kneeling stones were carried away, and the oak carrying chair was preserved in Little Dunmow Priory. In 1855 Victorian novelist Harrison Ainsworth published his popular novel “The Custom of Dunmow”, which resulted in him being credited with reviving the Trials as an event separate from the Church and the Lords of the Manor. Since that time the Trials were held regularly, and since the end of WWII have been set every 4 years in a leap year, for no other reason than it’s easier to organize. The modern Trials take the form of a court that has a Judge with the Counsel representing the couple, and the Opposing Counsel representing the donors of the Flitch of Bacon, with a Jury of 6 maidens and 6 bachelors, a Clerk of the Court to record the Trials and an Usher to maintain order. Each trial brings amusement, entertainment, renews community spirit and is a special moment in the history of a beautiful and prosperous town. Long may the tradition continue. After all – it’s BACON!

Get to Know Your Customers Day – This day is celebrated the 3rd Thursday of every quarter and is the day to take the time to get to know your customers and what their needs and opinions are about your business. It’s a good day for your sales department to do some special promotions – if that fits in with your business – perhaps take a client or two to lunch. It would also be a good day for the people who serve YOUR business to take some time to take you to lunch or get to know you better too! This goes both ways!

National Daiquiri Day – You might not believe it, but the daiquiri was the favorite drink of Ernest Hemingway and John F. Kennedy. I love strawberry daiquiris, and I happen to have all of the ingredients here at the house today for this delicious icy drink from the blog Step Away from The Carbs. This is on my list tonight! Yum!

National Raspberry Cake Day – I love raspberries. I think they are my very favorite berry. The scent of ripe raspberries on the vine takes me back to Grandma and Grandpa’s garden. Grandpa grew all sorts of berries, but when the raspberries were ripe was the best part of it. Grandpa let me pick – and eat – as many as I wanted, as long as I promised not to mash them into the path because Grandma didn’t like them tracked into the house. They are delicious any time, but warm from the sun, with the juice just bursting as I bit into them. . . I miss those days and I miss my Grandparents. I’m so grateful my kids got to experience the same joy in their garden that I did. This food celebration dresses up the raspberries by putting them into a cake. Raspberries are another berry that are low-carb and we do enjoy quite a few of them – especially now that it’s summer. I can almost smell the aroma of ripe berries in the warmth of the sun just thinking about them. Raspberry Cake just sounds decadent, doesn’t it? I found this slow-cooker Raspberry Coconut Cake Recipe on AllDayIDreamAboutFood.com and it seriously sounds like something I need to make. Yum!

I think the organizational project I am going to start today will be in my cookbook/appliance room (don’t judge – yes, I have a room dedicated to my kitchen toys). If I tackle just one shelf at a time it won’t be overwhelming. I am getting ready to start selling some of the sets of books that I don’t use, even though I’ve been collecting them for years, and I can’t get to them if everything is a mess. Even 30 minutes a day will help get my brain organized as I get the house organized. Have a wonderful Thursday! God bless you and I’ll see you tomorrow.