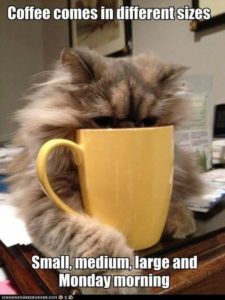 Good Morning.  It’s Monday.  Woohoo.  OK, summoning up enthusiasm today is a bit difficult and I don’t feel like working that hard at it. Sorry.  It’s been a sleepless couple of nights, between the wind, the dog making odors that no living creature should be making and my own internal furnace on high blast, I’m a bit on the tired side. I’ll get this cup of coffee down, which will probably turn the heat on again, but may rev up my energy at the same time.  I have to look at the positive right? Let’s get this Monday started!  I lift my cup to fellow exhausted workers everywhere!

Ask! So often we’re afraid to ask for help because we have to admit we don’t have the answers. Seek! Effort and interest and perseverance are necessary and that’s sometimes hard. Knock! In an era of doorbells, this is a forgotten action. But God wants us to use the A.S.K. principle and bring our hearts before him. So let’s don’t just whine, complain, desire, and want. Let’s A.S.K. our Father and seek his glory.

My old kitty, Pepsi, isn’t doing so well.  She will be having her 19th birthday next month if she makes it that long. My heart aches because I know the right thing to do would be to take her end and not prolong any misery she may be feeling. Her poor hindquarters are weak and she’s obviously having difficulty with moving around. Her appetite is non-existent, and she just sleeps a lot.  Yet, when I snuggle her in my lap she just looks up at me with this blissful expression on her furry face and purrs the purr of a contented baby and I just can’t bring myself to do it.  I pray that God lets her lay down to sleep and takes her Home to be with Tibbi Girl without any further hurting.  I don’t know that I have the strength to go end her life myself.

Answer Your Cat’s Questions Day – Do you ever look at your cat, see her staring at you, and wonder what on earth she (or he) is thinking, and what they want?  They want to say something, you can just see it, but they can’t.  I have a “talker”, my black kitty (Itty Bitty Kitty – I know, how original) she just goes on and on, chattering while she follows me around the house and I just wish to goodness I could “get” it.  But I don’t.  What we can do is be aware of our feline friends, and notice when they want something, and try to figure out what that is. One thing that we all need to understand is that people who love cats are happy by the very existence of our cat . . . but we as people must perform daily to try to keep our cat happy – and that’s just the way it is.  They are so much more demanding than dogs . . . but to me, it’s worth it.  Really  spend some time trying to understand your furbaby felines today – remember they like to be up high – it makes them feel safe to be able to look down on everything else. They aren’t trying to be a pain when they jump up on stuff, they are trying to be above the rest of the room so they feel like nothing can get them.  Ours have a tall cat tree – one kitty uses it, the other doesn’t. Go figure.  They want to be right where you are, they will follow you all over and even want in your lap when you are busy . . . um, well . . . indisposed.  You thought when your kids moved out you could go into the bathroom and be alone? Think again! If you have a cat in the house, that’s not gonna happen!  Just be understanding and loving with them today. Give them some extra pats and snuggles and see if you can figure out what it is they are asking of you.

Celebration of Life Day –  I know that I put this one down for the weekend, but I want to do it again I refuse to give honor to the horrible, tragic law that went into effect this day in 1973, so instead of celebrating that, on this blog we will honor our children and grandchildren in this country.  Each child, each life needs to be held as a precious gift and should be treated with the highest respect and dignity.  Today is Celebration of Life Day, the first week in January is Celebration of Life Week, and the entire month is called Celebration of Life Month!  Though it isn’t expressly stated, I am certain that the significance of this particular day being designated as Celebration of Life Day is in direct reaction to the anniversary of the Roe Vs Wade decision. This law – a travesty and slap in the face of God Almighty – has resulted in the murder of millions of unborn people and continues to do so each day.  We need to take every life seriously and hold them sacred.  Love the children, keep them safe from the scary things and people that would harm them, and let them be the gift to this world that God intended for them to be.

National Blonde Brownie Day – is a special day that is set aside to bake and eat blonde brownies.   What’s a blonde brownie?  I’ve had lots of traditional, fudgy brownies, but never a blonde one.  Well, they are made with light brown sugar in place of dark brown chocolate.  Another way to describe them would be butterscotch brownies – they were popular in the mid-1950s.  Sounds delicious! I didn’t have the time to make a batch of low-carb blonde brownies yesterday, I was too busy catching up making granola bars for yesterday’s celebration!  This is the recipe I am going to try tonight though.  They sound REALLY good! 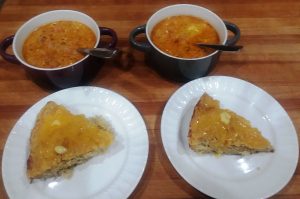 National Southern Food Day –  As I was researching this one I ran across all sorts of suggestions for things like fried chicken, greens, cornbread, and other foods that are traditionally obvious.  I also ran across various posts about southern cooking being about practicality and comfort food.  I read one post about soups and stews – and it hit me.  My Grandma was from Oklahoma, which is considered southern/mid-west-ish, right?  She was all about using leftovers and making something good out of the bits and pieces hanging out in the fridge, so that is what I did.  I threw together the last of the leftover frozen ham from a couple weeks ago with some homemade bone stock, diced up daikon radish, onions, a few carrots, the limp stalks of celery that were languishing in my vege drawer, some spices and for thickener, some cream cheese. Voila!  A delicious stew that hubby thought was good enough to enjoy 2nds.  I also made, from the blog All Day I Dream About Food, Low Carb Cheesy Skillet Bread. It’s sort of close to corn bread without the carbs. And there we had my version of Southern Food for this day. With all the rain coming down outside, it definitely felt comforting.

I need to get going. What I really want to do is go back to bed but that won’t be happening for quite a few hours.  I’m betting my 2nd cup of coffee won’t be waiting for me at the end of the afternoon like usual – I may need it right away! God bless you and I’ll see you tomorrow.