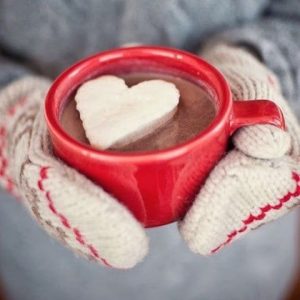 I love snow.  I have never, ever, ever made a secret of that.  I spend entire winter seasons BEGGING God for snow.  The ONE weekend I do NOT want snow, what was it doing last night and what is predicted for tomorrow? SNOWING! For anyone who had any doubts at all, this proves that God has a sense of humor – and right this morning I think it is a slightly twisted one.

There is no fear in love. But perfect love drives out fear, because fear has to do with punishment. The one who fears is not made perfect in love.

Is it wrong to ask God for something, then when He gives it, to ask Him to take it back?

Be Humble Day – The intent today is to, well, be humble!  It is not a day to brag or boast, not a time to talk about your success or accomplishments, which can be a humbling experienced – how appropriate is THAT?  Humbleness is a good thing, a virtue.  I know I’d much prefer being around a humble person over a braggart.  Practice being humble today . . . and every day – it will serve you well in life.  One very important exception today . . . though you can’t brag about yourself, it is VERY important to brag about your kids and grandkids today . . . or any day for that matter.

George Washington’s Birthday – George Washington was born on February 22, 1732.  He became commander in chief of the Continental Army in 1775 and fought a long and difficult war for freedom from British rule.  The war was finally over in 1781 when the Continental Army, with the help of the French, forced Cornwallis to surrender at Yorktown.  Washington was unanimously elected president in 1787 by the Constitutional Convention in Philadelphia and took the oat of office in 1789.  He served two terms of office from 1789 until 1797.  He came to be known The Father of Our Country.  After the presidency, Washington retired to his home in Mount Vernon, Virginia, where he died December 14, 1799 of a throat infection.  Happy Birthday Mr. President.

Walking the Dog Day – Spending time with our dogs is always special, but they get such excitement when it comes time for their walk.  And today’s walk is extra special since it is Walk the Dog Day!  I know that when I used to get the leash out of the closet for Tibbi when she was alive she would literally dance in place.  Sadly, her arthritis and hips didn’t allow us to go further than about a block before she started hurting and she would start limping.  But back in the day she definitely loved her long walks. Moose can barely contain his excitement at walk time. We usually take him out after dark – since it is winter and gets dark early – so he even has his own blue l.e.d. light-up collar so he can be seen by everyone. A black dog on a dark night is just about invisible otherwise.  If you have a dog that is young and energetic enough for a walk, put on those walking shoes, grab the leash and hit the trail!  You’ll both be glad you did.

Woolworth’s Day – I saw that this was listed as a holiday on the one website of listed holidays, but not one single article backing it up was out there for me to confirm it.  It brings back some really happy memories that I’d thought I’d share.  How many of you remember Woolworth’s?  It was the best “dime” store (my Grandma used to call it that) EVER.  They had a little bit of everything, from clothes, to pets, to rows of lacy handkerchiefs, toys, tools, candy and canned goods – you name it, they had it.  The BEST thing about them was the diner.  Along one entire all of each store was a long counter top, lined on one side with swivel chairs, with a short order cook and a waitress (who was usually chewing gum as fast as she could chew), in a pink waitress outfit.  Mom and I would go to Woolworth’s when I was really young – my brother wasn’t born yet, so I had to be under 5 years old – and she’d order us a basket of French fries and a chocolate milkshake.  Sometimes if it was payday I’d get my own, and we didn’t have to share!  We would sit there and dip our French fries into our shakes and giggle together.  I remember I’d usually be in a dress, and my feet wouldn’t touch the floor, so I’d happily sip my shake, munch my fries, and swing my legs back and forth while I watched everything go on around me.  We would finish our snack then go browse the store and leave with a few pieces of candy, or a small toy. I remember walking up and down each aisle.  There was so much stuff on all of the shelves, not a spare inch of space anywhere.  I would stand there and let my eyes take in everything, carefully reaching out to touch the pretty things, wish for the dolls in their frilly dresses, and watch the fish swimming in their aquariums. I just had a flash of memory that made me stop and close my eyes while I pictured it. I remember seeing a row of little plastic dolls. They were probably just a few inches long and each one wore a different color dress. I liked the one with the pink dress. I counted the change in my coin purse to see if I could get the doll, but didn’t have enough. Mom saw me and came over to see how much I had, smiled a gentle smile, took the doll off of the shelf and handed it to me. She made up the difference so that I could have this toy. As a parent, I understand why she did that. She had watched me looking at these dolls over several visits, but I knew not to ask for one because we just didn’t have the money for extra things like this and I already had some dolls at home. It’s funny, I hadn’t thought of that moment for years, but as I wrote this originally I found myself tearing up at the memory. Thanks Mom, for giving me that moment, and all of the other moments throughout the years.  That time, and so many others, created so many beautiful memories for me.  I was really sad when the Woolworth’s closed up, and all that was left was the memories – but what memories they are.  I’ll treasure them always.

National Margarita Day – Ole! I don’t know about you, but I’d think that a better time of year for Margarita Day would have been in the heat of summer when an icy cold, refreshingly tart Margarita would be the perfect end to a scorching hot day, however the people who started this holiday obviously thought that February was a better idea.  So who am I to argue???  Did you know that the world record holder for the largest margarita is Jimmy Buffett’s Margaritaville in Orlando, Fla.? It was made with 5,861 gallons of blended spirits. Margaritas are great, but let’s face it – they would be nothing without the tequila! Here are some interesting tequila facts:

* “The Guinness World Record for the most expensive bottle of tequila ever sold was the Platinum & White Gold Tequila bottle, which went to a private collector in 2006 for a whopping $225,000.”

* “To be classified as tequila, the spirit must contain at least 51 percent blue agave.” * After the agave hearts have been mashed to a pulp, some tequila-makers continue to press it with their hands and feet.

Not sure if I’ll celebrate this one or not, but it sure does sound good, doesn’t it?  I need to leave now – a bit earlier than usual. I have a feeling this commute to work is going to be a bit interesting, what with the snow and cold temperatures. God bless you and I’ll see you tomorrow.