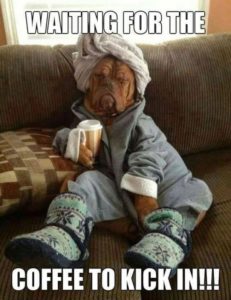 How nice is it that the sun isn’t completely going down until after 5:00 now?  I admit that I really enjoy getting home while there’s a little bit of light left in the sky.  Which is a direct conflict with my wish for snow, but there you go. I want what I want! Snow AND daylight! It’s not too much to ask, right?  It’s going to be a glorious day, isn’t it?  Why? Well, we are here, we are alive, we are living through our day and those are truly wonderful things to be. AND it is no longer Monday . . . taking us a step closer to the weekend. WOOHOO!

He who pursues righteousness and love finds life, prosperity, and honor.

Isn’t it funny that when we set off to find happiness or joy or significance or meaning, we seldom find it. Instead, when we offer to serve others and give ourselves wholeheartedly to the Lord and his work, it is then that we find what we most need.

What makes your day wonderful?  Today my day will be awesome because some of the issues that cause me stress are not a problem today. It puts a smile on my face to anticipate it and know that when I walk in the doors at the office, though it may be raining outside, it will be all sunshine for me on the inside.

Canadian Maple Syrup Day – The Canadian people have long celebrated the gift of rich maple syrup, but they didn’t have a set holiday for it.  Maple syrup festivals happen in late March to early April around the country, and the American Maple Syrup Day is celebrated in December each year.  It was decided in 2010 that Canada needed a special day to mark the beginning of the syrup rising in the maple trees, even though they may be running at full speed closer to the beginning of spring.  Those first few drops of syrup appear in early February, and those are the ones that are worth celebrating!  And so it is that February 6, 2010 marked the first Canadian Maple Syrup Day. So how should you celebrate this one?  Well, by cooking with pure Canadian maple syrup of course! Make pancakes, waffles or French toast for breakfast.  You can use maple syrup for supper in roast potatoes, yams, carrots or squash.  You can use it as a glaze on ham, or a marinade for salmon.  It’s great for dessert too!  Maple syrup cookies, ice cream or liqueurs are just a beginning!  YUM!

Lame Duck Day – We have all worked with someone who has given their notice at work, they are leaving in two weeks, and suddenly their work ethic goes out the window.  They begin going through what many of us call “short timer’s syndrome”.  If we haven’t seen it, then we’ve probably experienced it ourselves.  Any enthusiasm for the job just goes out the window and it’s honestly quite normal.  So normal in fact that it has an official name – this person is now a Lame Duck.  Typically, this term is used to refer to politicians or someone whose tenure is nearly up, rendering many of their decisions worth not a whole lot in their last days.  Often employers will just let someone go before they have served their notice, rather than try to repair the damages done by an employee who has stopped caring about the end result simply because they won’t be there to reap the “rewards” for their job that was done in a sloppy fashion.  The 20th Amendment to the US Constitution addresses the issue of term limits, creating Lame Ducks every time a term ends . . . scary stuff.  Politicians who are nearly to the end of their terms rush to push through their own agendas, to heck with everyone else – before they are out of office.  We saw a lot of that at the end of our previous Lame Duck’s time as President.  It truly wasn’t pretty, and it has taken our new President a year to wipe out quite a few of them and put things on the road to recovery.    Today is called Lame Duck day because on February 6, 1933, the 20th Amendment to the Constitution went into effect.

This Day in History

1935 – The board game Monopoly first went on sale. 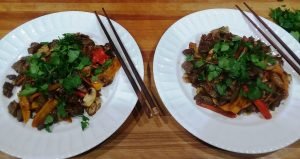 Chopsticks Day – Chopsticks have been around for 1000’s of years and they say is an efficient way to get food from plate to mouth without using your hands. What better way to celebrate this day than by having a meal that you eat with chopsticks? Yum! Challenging for those of us who are completely uncoordinated, but I was impressed by Hubby’s skill with them! I used to call chopsticks my Weight Watcher’s eating utensils because it slowed me WAY down and reduced the amount of food I’d be able to shovel into my face.  Low-Carb Szechwan Beef was our chopstick meal of choice and I found it to be delicious! I wish I’d had longer to marinate the beef so it would have been slightly more tender, but there weren’t any leftovers, so that says something, right?

The recipe I came up with was sort of off the cuff.

Whisk in a little xanthum gum (1/4 tsp at most) to thicken the sauce slightly) Whisk quickly so it won’t clump.

Add to the beef and veges, and toss together.

The sun is starting to lighten up the morning sky, so that means I get to drive to work in a little bit of light too! Yep. It’s going to be a great day.