Today is a VERY good day, because not only are we celebrating Friday, but for us, we are celebrating the birth of our very special Little Man R three years ago today! Seriously, he is a bright light that has been shining since the moment he arrived. He is smart, handsome, charming, incredibly funny and he pulls my heart strings in so many different directions all at the same time.  We don’t get to see him until tomorrow, but I’ll be celebrating his birthday while I bake him a cake.  This first three years have gone by so quickly, that it almost makes my head spin. I almost feel like if I take a second to blink, he’ll be ready to start high school!

I thank Christ Jesus our Lord, who has given me strength, that he considered me faithful, appointing me to his service.

Hard Boiled Guy/Girl Day – I think this is a new one, and I have been looking for how, why, what, who, etc. but can’t find anything. Anyone have any interpretations of this one?

Mammography Day – In 1993 Bill Clinton proclaimed the 1st National Mammography Day, an annual observance that encourages women across the country to schedule their annual mammograms.  According to a report by the American Cancer Society, that though breast cancer rates in the U.S. have dropped 34% since 1990, it is estimated that over 230,000 new cases of invasive breast cancer will be diagnosed this year and nearly 40,000 American women will die from the disease.  Men can get breast cancer too.  It always surprises me how few people know that!  Granted, it isn’t as common, but it still happens.  The estimate is that 1,900 new cases of breast cancer in men will be diagnosed this year.  Screening and early detection saves lives, so in honor of National Mammography Day, women across the nation are encouraged to schedule a mammography appointment.  Do it for yourself, do it for your family.

Meatloaf Appreciation Day – I am a big fan of meatloaf. My dad made it when I was growing up and I always really enjoyed it.  When I became an adult, I started making it, trying to duplicate the way he did it. As I learned about spices and began experimenting with things, I feel like I have been able to create some truly delicious meatloaves throughout the years. It isn’t something we have all the time, but we do enjoy it when we have it.  You can make it with just ground beef, or you can do what I do and mix ground beef with ground pork or sausage. Some people put cheese in there, some use marinara sauce, some bbq sauce, etc. You get the point – it is a very versatile recipe that just keeps giving us comfort and full tummies every time we have it. 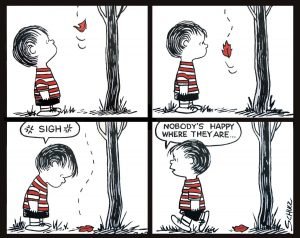 Newspaper Comic Strip Appreciation Day – I remember when I was a kid, Dad would read the paper from front to back. When he was done, he would hand me the comics and, at least on Sunday mornings when they were in color, we would read the together. I admit that there were quite a few I didn’t understand since they were often political in nature and at that point, I hadn’t developed my taste for all things current events, but we still laughed at them together. I knew they were supposed to be funny, so I played along.  I stopped buying newspapers a long time ago. Our local paper is a typical liberal rag, so I won’t waste my money on it, but I do miss the comics.  Did you know that the first comic strips appeared during the New York newspaper industry’s rivalry wars during the 19th century? The New York World had the first comic strip in 1894, The Yellow Kid. It was about a boy who was down on his luck who hung out in Hogan’s Alley. Two years lager the Morning Journal started their own comic strip with a weekly full-color comic strip, even luring the creator of The Yellow Kid away from New York World. By 1897 comics were in very high demand, and it was time to capitalize on it.  What followed was more and new strips with different characters, each getting bigger and better, which gained more loyalty and bigger following. It did the trick. It sold papers. And now, look around! The comic strips became comic books, which became cartoons and now movies! Comic themed movies are HUGE! I do miss the days of sitting over the funnies with my Dad though – that was special Sunday morning time.

National Chocolate Cupcake Day – These days, you can’t flip through the channels without stumbling on a TV show about cupcakes. But these hand-held cakes didn’t become a household name until 1919 when Hostess introduced its first snack cake, The Cupcake. We are all also familiar with Hostess Dingdongs, which is sort of like a cupcake.  Today I won’t be making cupcakes, but I will be making a chocolate cake recipe called DingDong Cake.  I hope it turns out!

I need to get started on the cake! Have a fantastic day! And an even better weekend. I’ll try to get a post ready tonight for the rest of the weekend, but we are getting ready to celebrate R’s birthday tomorrow, so I have tons to do and don’t know if I’ll have time. God bless you and I’ll see you when I see you!