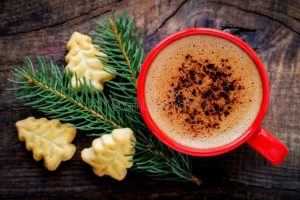 There are just some evenings I can’t, or just don’t, get the post started for the next day. My reasoning is sound for Monday night . . . I was on a date with my hubby! How awesome is that? A Monday night date is pretty darn fun and very unusual when it isn’t combined with doing other things like shopping. We had a blast. We went out for dinner, then wandered on the waterfront to see the incredible Christmas light display that volunteers spend HOURS and HOURS putting together. Pictures wouldn’t do it justice, though we do have some that I’ll try to share if any actually turned out. There are so many lights that it is too bright to show the individual colors on most of them.  We got home late enough that I just didn’t feel like being on the computer, so I didn’t! It felt almost decadent! I’d intended to do two separate posts but decided just to combine them. The evenings are too short as it is, without putting myself through extra work.

Yesterday was Moose’s birthday.  I was having a difficult time getting a good picture of his face that also showed his birthday hat – so t his is as close to a good one as we got.  It’s hard to believe our furry boy is three years old! 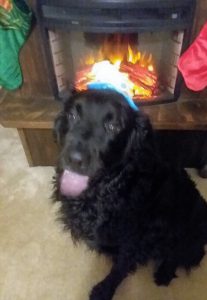 The Lord himself will give you a sign: The virgin will be with child and will give birth to a son, and will call him Immanuel.

God is interested in us personally. So much so, that he personally gives us this sign. Because of Matthew’s explanation of the meaning of the name Immanuel, we know what that sign was — Jesus coming to live as God with us. His presence is God’s presence. His life is God’s sign. The miracle of his conception is God’s mystery and also his statement of grace for us.

When the time had fully come, God sent his Son, born of a woman, born under law, that we might receive the full rights of sons.

God waited till history reached his appointed time and sent Jesus. Just the right time — Roman rule, Jewish subordination, good roads, freedom, a degree of safety, a common trading language, cruel and barbaric punishment accompanied by religious infighting. In times such as these, he sent his Son to be a woman’s son. He emptied his home so he could send a redeemer to our home. He did it so we could be his children — not pretend children, but real children, with full rights. So he could not only be God, but so he could be Abba.

Why do we put up Christmas trees?  Where does the tradition come from and does it tie in to the birth of Christ?  Well, I looked up several sources and this is what I found out:  The fir tree has long been associated with Christianity, beginning in Germany almost 1,000 years ago with St. Boniface, who converted the German people to Christianity.  It is said that he came across a group of pagans worshiping an oak tree, and in his anger, he cut the oak down.  To his amazement a young fir tree sprung up from the roots of the oak tree, and he took this as a sign of the Christian faith.  That was the very beginning of the Christmas tree, but it wasn’t until the 16th century that fir trees were brought indoors at Christmas time.

The Christmas tree has even older history than that though!  King Tut never saw a Christmas tree, but he would have understood the tradition that traces back to long before the first Christmas.  The Egyptians, like many other cultures, treasured and worshiped evergreens.  When the winter solstice came they brought green date palm leaves into their homes to symbolize life triumphing over death. The Romans also celebrated with greens – with a winter solstice festival called Saturnalia – in honor of Saturnus, the god of agriculture.  They decorated their homes with greens and lights, exchanging gifts.  They gave coins for prosperity, pastries for happiness and lamps to light one’s way through life.  In Great Britain centuries ago there were woods priests called Druids who used evergreens during mysterious winter solstice rituals. They used holly and mistletoe as symbols of eternal life and placed evergreen branches over doors to keep the evil spirits away.  Late in the Middle Ages, Germans and Scandinavians placed evergreen trees inside their homes, or just outside their doors, to show that they were hoping for the upcoming spring.  Our modern Christmas tree is an evolution from these early traditions.   According to legend Martin Luther began the tradition of decorating trees to celebrate Christmas.  In about the year 1500, one crisp Christmas Eve, he was walking through snow-covered woods and was quite taken with the beauty of a small group of evergreens that were dusted with snow and shimmered in the moonlight.  When he got home, he set up a little fir tree indoors, so he could share this story and the beauty with his children.  He decorated it with candles, which he lit in honor of Christ’s birth.   The Christmas tree tradition likely came to the United States with Hessian troops during the American Revolution, or with the German immigrants to Pennsylvania and Ohio.  The custom spread slowly though.  The Puritans banned Christmas in New England and even as late as 1851 there was a Cleveland minister who just about lost his job because he allowed a tree in his church.  Schools in Boston stayed open on Christmas Day through 1870 and even sometimes expelled students who stayed home that day! In 1851 a Catskill farmer hauled two ox sleds of evergreens into New York City, and sold them all, starting the Christmas tree market.  By 1900, one in five American families had Christmas trees, and 20 years later the custom was nearly universal.

With all of that history though – I’ve barely scratched the surface – what it comes down to is that the Christmas tree is enjoyed as a holiday decoration by people of many cultures and religions.  To Christians it is a promise of renewed life during a barren season, symbolizing Christ’s birth, resurrection and promise of eternal life.

Kaleidoscope Day – I found this day listed on one of my celebration calendars, but I cannot find out what it’s about, why it’s a special day or who started it. I suppose we could make our own interpretation and look through a kaleidoscope with the awe and wonder of a child and enjoy all of the beautiful colors! Sounds good to me. 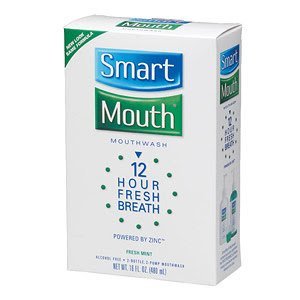 National 12-Hour Fresh Breath – Bad-smelling breath isn’t just an annoyance to the people around you; it can also mean there is a health problem. The toxic fumes could mean dry mouth, gum disease or something else that needs to be checked by a medical professional.  Obviously, or it should be obvious, taming the nastiness can be helped by brushing and flossing, rinsing your mouth and using breath fresheners.  There are a few people who come into my office that I’ve really felt like force feeding mints – they lean over my desk to talk and it just about knocks me backwards.  Awful – it’s a terrible combination of stale coffee, bad teeth and chewing tobacco.  They may as well be eating sewage, it’s that bad!   If you see people recoil from you, please take the hint and keep mints and gum on hand and see your dentist. 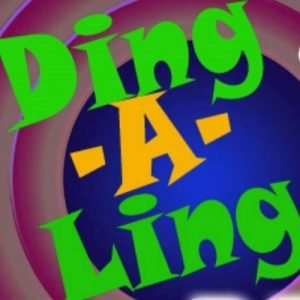 National Ding-A-Ling Day – This one is unusual, though I suppose no more unusual than any of these other strange ones that we encounter from time to time.  This one is about being bizarre and cutting loose with crazy behavior – for one day only of course – and prepare yourself to see all sorts of nutso stuff from anyone who chooses to celebrate this one.  There were references about this one being a day for wackos, lunatics and people who are generally off of their rocker.  It’s most likely just a day to cut loose and be a little weird.  For many of us, that won’t be very difficult. 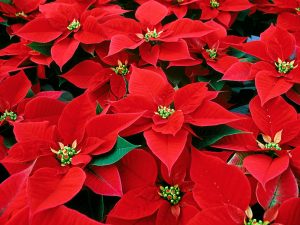 Poinsettia Day – This beautiful, vibrant plant was brought to this country by Joel Roberts Poinsett.  He was the first Ambassador to Mexico and brought the plant back to his plantation in the U.S.  He grew the plants in his Greeneville, S.C. plantation and gave them out as gifts to friends. According to Mexican folklore, there was a little poor girl who had nothing to bring to church for Christmas.  On her way to church she picked some plants by the side of the road.  After she walked into the church the leaves at the tips of the branches turned to bright red flowers and became Poinsettias!   These beautiful flowers are a well-recognized symbol of Christmas. 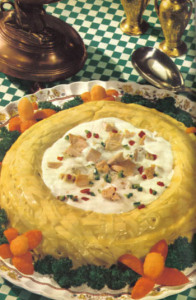 National Noodle Ring Day – This dish is exactly as it sounds: pasta, cheese, eggs cooked in a ring mold.  I really had to search to figure out what exactly this was!  Apparently, a Noodle Ring was at one time a really popular dish . . . before my time? Don’t know, but it’s interesting.  So, WHAT is a noodle ring?  Well, it is a dish made by mixing eggs, milk, butter and seasonings together, then putting all the ingredients into a ring mold to bake.  One suggestion was to add in cheese also.  When the ring is baked, it is plated onto a dish and the center of the ring is filled with creamed chicken, vegetables or other ingredients of choice.  The noodle ring was once a staple of mid-century cookbooks, but it has lost its popularity.  Obviously – since nobody I knew had ever heard of it.  It could be interesting to make this dish to see if your family thinks of it as a treat, or not.

Cook noodles until tender (about 15 min.) in 3 qts. boiling water to which 1 tbsp. salt has been added. Drain. Beat eggs until light, add remaining ingredients, and noodles. Place in well-greased 10-inch ring mold, set in pan of hot water. Bake 45 min. at 350°.

Here are some other recipes that have similar ingredients that Food.com came up with since they didn’t have any authentic noodle ring recipes – or so it appeared. 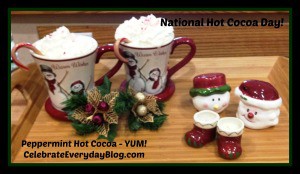 National Cocoa Day – After extracting and pressing, cocoa beans become powder. It’s sold as natural (just beans) and Dutch-process (solution-treated beans for less bitterness).  The end result though, is an incredibly creamy, sweet, hot treat that many of us crave during the cold winter months.  I know that we will be celebrating with Peppermint Cocoa today for sure!

Well, I’m always happy to have a hot cup of cocoa, so today’s celebration is just perfect! What a lovely treat to look forward to after dinner. Time to get the day going! Have a wonderful and safe day! God bless you and I’ll see you tomorrow.