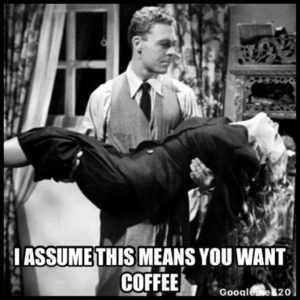 It’s Friday! Oh, happy day!  I don’t know how your night went last night, but mine was somewhat painful!  I woke up, right after getting into a sound sleep around midnight, with violent muscle spasms in both legs. The best thing to do, at least for me, when one starts is to immediately stretch it, get out of bed and walk around until it calms down. That only works if I wake up before it is bad. When I am shaken awake by the indescribable feeling that is both calves AND shins, and one thigh, all seizing up at the same time, all I can do is whine awhile until I can manage to straighten out my feet enough to stand up. Walking is out of the question since a hobble is about all I can muster up at that point. That’s my life lesson for forgetting to take my magnesium and potassium. Won’t happen tonight, I can tell you THAT much! Holy moly! Today I am so sore I feel like my lower half fell down a flight of stairs – or what I imagine that might feel like. *sigh* All I want right now is a hot bath with Epsom salts.

He knows the way that I take; when he has tested me, I will come forth as gold. My feet have closely followed his steps; I have kept to his way without turning aside.

How we long for this to be our true confession. We are not yet gold, but long to be. We are not yet fully following his steps, but are trying. We have tried to not turn aside, but we sometimes falter. Thank God for his grace until our intentions and desires are fulfilled in our discipleship!

What kind of a horrible parent forgets their child’s birthday??? Seriously! What kind? I don’t care how old someone is, if their parent forgets their birthday it hurts! Now, I’m not talking about parents with memory issues, I’m talking about narcissistic pieces of dirt who don’t actually deserve to be parents in the first place. My daughter’s birthday was yesterday and the self-centered piece of scum who fathered her managed to talk her ear off yesterday – about himself – without once remembering that it was her special day.  The anger I felt towards him is indescribable.  Of course, that anger never really went away, but it definitely pumps it up a bit.

Dress in Blue Day (Always the 1st Friday of March) – This is a sad one, but one that is important.  One in every 20 Americans will be diagnosed with colon cancer, leading to more than 50,000 deaths each year.  This is such a sobering number, but the Colon Cancer Alliance refuses to accept these horrible statistics for a disease that can be largely prevented through recommended screening.  They are urging individuals, businesses and community groups across the country to take part in the nationwide “Dress In Blue Day” today.  By wearing blue and urging other people to wear blue also, you can help put colon cancer awareness on the map.  This event takes place each year during National Colon Cancer Awareness Month.  The idea behind it is to start a conversation nationwide about how important it is to get screened, and save lives by knocking colon cancer out of the top three cancer killers.  The first step in saving lives is starting the conversation, so let’s wear blue and raise awareness today.

Dr. Seuss Day/NEAs Read Across America  – Dr. Seuss is considered one of the greatest children’s book writers and illustrators of all time. Having published 46 picture books, The National Educational Association adopted his birthday, March 2, as National Read Across America Day.  To celebrate Seuss’s birthday and to help support the Read Across America effort, here is a list of the top 5 Dr. Seuss books. I have copied and pasted the book list for you – one for simplicity and two, I couldn’t have written it better myself.

The Cat in the Hat – The story of two children who are left at home all alone on a rainy day when they receive a visit from a cat wearing a top hat. The cat’s wacky tricks and efforts to entertain the bored children wind up wrecking the house. The children have to capture the cat’s raucous playmates, and herd the cat out of the house. Luckily, he cleans it up as he leaves. It ends with children who are relieved to have nothing to do when their mother returns home. This is the book that introduced us to Thing One and Thing Two and spawned, not only a sequel, The Cat in the Hat Comes Back, but an animated series and a major motion picture starring Mike Myers.

The Lorax – The Lorax is a wizened character who “speaks for the trees.” Published in 1971, this was one of the first lessons in the harm of deforestation and the importance to care for nature that many children for decades received. The story follows the fate of a forest that is cut down when industry moves in to create thneeds to meet the high demand, because “everyone needs a thneed.” But the drive to produce more and more leads to the last tree being cut down and the world becoming filled with bottled air, fake trees and a completely manufactured life. In the end, one young boy plants the last seed which recalls the spirit of the Lorax and the forest.  The books popularity led to an animated movie in 1972, and a computer animated film in 2012.

Green Eggs and Ham – The classic story of a boy who is offered a new food insists, as many a child does, that he does not like it and will not eat it whatever the circumstance is a popular favorite. After repeating over and over, “I do not like green eggs and ham. I will not eat them, Sam I Am,” winds up giving in to Sam. The boy tries the green eggs and ham, and does in fact like them. Aside from the fact that it rings true to parents with picky eaters for children, the words are so skillfully crafted that the catchy rhyming couplets stick in your head for years after you have read the book. Perhaps the message of the book may just pay off for parents hoping to get kids to clean their plate.

One Fish, Two Fish, Red Fish, Blue Fish – This is a lesson in counting and colors, opposites and fun. The story is loosely assembled around a pair of siblings and their weird pet fish. While the story starts with fish, it moves into the wacky world of Seuss quickly and passes from fish to body parts, and then straight into tongue twisting hilarity.

Horton Hears a Who – Horton, an elephant, is the only creature in the jungle who can hear the Whos who live on what looks like a speck of dust. When all the rest of the jungle inhabitants do not believe him, Whoville is in danger unless the Whos can make their presence known to the other animals. The Whos try with all their might to make as much noise as possible, but it is not until the smallest Who of all adds her own sound to the clamor that the animals realize Whoville, even though only the size of a speck of dust, does exist.   Like The Lorax, this is another one of Dr. Seuss’s parable stories. The message that “a person’s a person, no matter how small,” resonates especially with children because they relate to the concept of being small, and just like the people living on the tiny speck of dust that is Whoville, they sometimes can feel like they are not heard.

So grab your favorite Dr. Seuss book and celebrate, even if you are not a kid anymore.

Employee Appreciation Day– We have Secretary’s/Admin Assistant’s Day.  We have Boss’s Day.  What about the other employees?  Today ALL employees get to feel appreciation, since it honors employees everywhere.  This is one that is supposed to be created and executed by the company the employees work for, and it can be as simple as a thank you, or as big as a treat, lunch or even a small gift of recognition.  Everyone deserves to feel appreciated . . . so let’s hope that all employees go home feeling that way today.

National Salesperson Day – Sales professionals make up a huge art of our workforce.  They are under appreciated and sometimes even thought of with disdain.  We’ve all run into salespeople who are just plain pushy – used car salesmen come to mind, or telemarketers.  Fact is that they do perform a service that needs to be appreciated . . . SOMEONE has to do these jobs, right?  Other examples of salespeople to appreciate today would be clerks at stores, people who sell door to door (these are becoming fewer and fewer – with good reason.  I won’t open my door to one EVER), insurance agents, mortgage brokers and loan officers (yep, they are selling too), manufacturer’s representatives, and the list goes on.  You don’t have to LIKE being pressured to buy, but when you are in the market to get something, you’ll need a sales person to help you!  So, if you are in sales, today is for you!

World Day of Prayer – This is a special one.  Today is World Day of Prayer, an international Christian women’s initiative that works under the motto, “Informed Prayer and Prayerful Action”.  It is celebrated each year in over 170 countries on the first Friday in March.  This movement is aimed at bringing together women of various races, cultures and traditions in a common day of prayer each year.  The Women’s World Day of Prayer first began in the United States in 1887, when Mary Ellen James, the wife of a Presbyterian minister from New York, called for a day of prayer for home missions, and Methodist women called for a week of prayer and self-denial for foreign missions.  Two years later, two Baptists called together a Day of Prayer for the World Mission.  The Day of Prayer started by these two women spread to Canada, then to the British Isles in the 1930s.  On t his day, women are encouraged to be aware of other countries and cultures, taking up the burdens of other people, sympathize with the problems that other countries and cultures suffer, and pray with, and for, them.  We should each be aware of our talents and use them to serve God by helping others.  Today we demonstrate that prayer and action are inseparable and that both have influence in the world that cannot be measured.

1962 – Wilt Chamberlain of the Philadelphia Warriors scores 100 points in a basketball game.

National Banana Cream Pie Day – Custard pies date back to antiquity, but this version, with banana cream and a fluffy white topping, is a particular favorite in the American South.  Now, bananas are often thought of as a thing of the past when switching to low carb, and bananas themselves ARE, however banana flavor is still a distinct possibility.  I believe that if I have the time and energy tonight, I may try t his Banana Cream Pie recipe by Low Carb Maven.  It sounds delicious!

It’s time to hobble my way to work, and I will be looking forward to the end of the day with every painful step I take. Geesh! Take your vitamins and minerals so this doesn’t happen to you! God bless you and I’ll see you tomorrow.

2 thoughts on “I Do Not Like Green Eggs and Ham . . . Do You Remember How This Line Ends?”