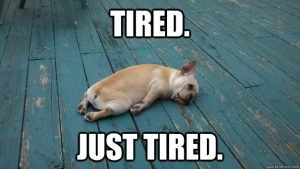 Yesterday was a long day, so I am hoping that today will be a quick one.  As you’ll see in my Food for Thought to follow, I am not dealing so well with things right now . . . and I don’t like it.  I am usually a fairly positive person, and I suppose in a way I still am. I am absolutely positive that I don’t like things the way they are right now.  I prefer being able to find joy in just about everything, but lately, unless it involves my family, I am not doing that.  Hopefully I can have a relaxing evening, sleep in a little tomorrow, then I get to pick up Baby R to hang out with him overnight.  He’ll perk me up – how can he not? He’s adorable!  My goal today is to focus on the good things . . . after I post this of course.

Blessed is the man who perseveres under trial, because when he has stood the test, he will receive the crown of life that God has promised to those who love him.

Only Christians win at life. That’s because none of us who is human has the power to hold back our greatest enemy, death. But when we have persevered, we are given the ultimate victory: LIFE that will not end because our lives are in the hands of the one who defeated death!

Are you ever weary to the bone?  Weary of people who can’t seem to summon up professional behavior? Weary of rude attitudes, slammed doors, ignored emails and unreturned telephone calls? Weary of not receiving decent customer service from the people who are in customer service jobs?  Weary of seeing people park in two spaces instead of one, or parking so close to the car next to them that the people in the other car can’t get in or out? Weary of idiots in the entertainment issue trying to act like they are important political figures, or that their opinions actually count for anything? Weary of the imbecilic lemmings out there who would rather destroy our nation than fight for upholding our Constitution?  I’m weary. I am weary to my soul and am not sure how to stop feeling this way. I don’t like people very much – at least not many of them, and that’s sad because I used to be able to find something good in just about everyone.  Even people who call themselves friends – at least at one point – lie, backstab, gossip or are so incredibly sensitive that they can’t even tolerate an indirect comment that points out something they have done that is rude or inconsiderate.  At this point I find myself praying to win the lottery or hit some other sort of jackpot so Hubby and I can move far away from any population centers and get away from all of the annoyances that are so prevalent in society today.  I am truly hoping that the way I feel right now will reduce in severity when I finally get my iron levels back up, and adjust my thyroid supplements up a bit.  Maybe I’ll be able to put with the BS a little better, or at increase my patience level somewhat.

National Puppy Day – PUPPIES!  Who doesn’t LOVE puppies?  Today millions of Americans and people around the world are asked to show their love and appreciation for puppies.  Dogs have been known as Man’s Best Friend for decades, and when we adopt a puppy it isn’t just a friend, it becomes a part of our family.  This day was set up back in 2006 by Colleen Paige.  She is a Celebrity Pet and Home Lifestyle Expert and Author – I have NO idea what she actually does, but her title makes it sound like she has a pretty awesome job!    She is also the founder of National Dog Day and National Cat Day.  There are many ways to celebrate National Puppy Day – and honestly you can celebrate this one any day of the year!  You can adopt a puppy!  You will not only be giving a dog a home, he or she will become your new best friend.  If you can’t adopt, make a donation to a local pet shelter, which is always a great thing to do and always needed.  Without donations most pet shelters couldn’t stay open.  If you already have a puppy, you can give them special treats and do some extra spoiling!  Moose is 3 years old, but he still acts like a puppy and I get great satisfaction and happiness out of spoiling him each day.

Near Miss Day – This celebration should come with a great big “WHEW!” attached to it!  Today we commemorate the day a huge Asteroid nearly missed hitting the earth.  It was on March 23, 1989, and an asteroid the size of a mountain, came within 500,000 miles of a collision with Earth. In interstellar terms, that’s awfully close. If it had it collided with the Earth, it would have left a devastating crater the size of Washington, D.C. It’s affect on the planet would have been catastrophic. We have had other near misses though.  Funny we don’t hear about them until AFTER the fact. They say that these near misses with large, potentially life threatening galactic objects don’t happen very often.  It is believed that a large asteroid collided with the earth and caused the extinction of the dinosaurs, and that it is just a matter of time before another catastrophic collision happens.  No sense worrying about it though, since there’s absolutely nothing we can do about it anyway.

OK Day – Did you ever wonder where the word OK came from?  It actually started out as a joke.  A journalist for the “Boston Morning Post” purposefully used an abbreviation of a misspelled phrase “all korrect”.  The word first appeared in print on March 23, 1839.  Most of the “abracadabraisms” that were popular with the journalists in 1839 are no longer used, or probably even known, but OK stuck around.  According to Dennis Baron of the University of Illinois at Urbana-Champaign compares the popularity of OK with common abbreviations of today, including BTW and OMG – both of which appeared in print long before instant messaging and texting.  In 1917, J.A. F. Fisher wrote “I hear that a new order of Knighthood is on the tapis-O.M.G. (Oh! My! God!) – Shower it on the Admiralty!” (Online Etymology Dictionary)

1775 – Patrick Henry declares “Give me liberty or give me death!”

Chia – I hadn’t heard about chia seeds for actual consumption until a few years ago. Before that the word chia was connected to some silly shaped plant pots to grow chia sprouts. It never occurred to me that it was an actual food. It turns out that not only is it a food, it is considered to be a Super Food!  This celebration was started by the company Mamma Chia in 20016. They are releasing a new product called “Clean Energy Beverages” that are a combination of organic chia with clean caffeine from organic yerba mate and organic green coffee beans. Apparently, this beverage provides 2,500 mg of Omega 3 and 90 mg of natural caffeine per serving. I think I need to look this stuff up and see where I can buy it!  Chia is one of the most nutrient dense foods on the planet with each tiny seed providing an excellent plant-based source of Omega-3, complete protein, fiber, calcium, minerals and more. Mama Chia says that on a gram for gram level, chia has 8x more Omega 3 than salmon and is one of the top sources of alpha-linolenic acid, which is a plant-based Omega-3 fatty acid that our bodies cannot produce on their own. Today you can get 23% off of all orders from www.shopmamachia.com and use code NCD23.  I may have to check that out!

Chips and Dip – Though dipping food is an ancient practice, the modern chip-and-dip craze didn’t take off until the 1950s, thanks to marketing campaigns by the Lipton company.

Melba Toast – I love melba toast.  It comes in little rectangular pieces, or little round snacks, and even in different flavors.  To make Melba toast all you do is toast some crustless bread, lay it on a plate and then slice it horizontally from end to end. Then you take those two thin slices and toast them again and BAM, Melba toast! It’s very simple and it comes out like a crouton cracker. Feel free to top it with anything you like!  If you are like me and have challenges with slicing bread thin and straight enough- you can always buy it in a box and top it with your favorite toppings for a delicious snack.