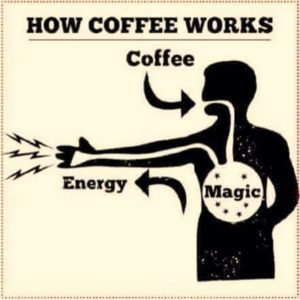 Good Morning and Happy Tuesday! I am actually very happy that for right now it is cloudy and cool. Because I was gone yesterday, I have a lot to do today and getting anything done when it is muggy and yucky out isn’t easy.  I had a list of things to do that has been shaken around a bit, so something I was going to work on tomorrow will be started today, and something I was going to try to do today will be done tomorrow. I just hope tomorrow starts out cool also because doing things outside in the hot weather isn’t my idea of a good time.  Getting a set schedule going for being unemployed isn’t easy because I find myself with a long list of things to do, that ends up being a bit on the overwhelming side, and I end up wandering from room to room, picking things up and putting them back down, then going to a different room and doing the same.  I need to get my head together and make sense of each day, the house, the to-do list, and all that goes along with it.  It’s easy to organize a drawer or even a room, but organizing my mind is proving to be a bit more of a challenge.

He who began a good work in you will carry it on to completion until the day of Christ Jesus.
—Philippians 1:6

God finished his creation work in the world in 6 days. He sustains it with his powerful word. He is still working on us and in us and he will continue to work his will in us to his glory (see Philippians 2:12-13) until Christ comes to take us home!

Starting something new is scary – whether it is moving to a new place, starting a new job, creating your own business, or starting a new relationship . . . there are any number of things that cause us to have nerves as we proceed on this adventure of life. If we let it stop us in our tracks though, we will stagnate, and that’s not a good thing. When I am nervous about something I tend to avoid it altogether, which isn’t good. So, with that though, I am off to start working through my new beginnings issues and create a comfortable work space for myself. Wish me luck!

Clerihew Day – Today we celebrate the birthday of poet, journalist and author Edmund Clerihew Bentley. He created one of the most respected forms of poetry in the English Language – The Clerihew. The Clerihew is a four-line verse where the end of the first line, or more often the full first line, is the subject’s name. Clerihews have an AABB rhyme scheme and meter is of secondary, or no, importance. Here are a few examples I found:

Even Steven
Will be leavin’
To get mugged in Chicago
After watching Dr. Zhivago
– the author, age 11

According to the Encyclopedia of British Humorists, Steven Gale, Clerihew composed the first poem of this type as a 16 year old student in science class, in honor of a British chemist:

Sir Humphry Davy
Was not fond of gravy.
He lived in the odium
Of having discovered sodium.

Apparently, the poem was a huge hit with the other students, because he never stopped writing them. He published his first collection in his 1905 book, Biography for Beginners. Here is another example:

Sir Christopher Wren
Said, “I am going to dine with some men.
If anyone calls,
Say I am designing St Paul’s.

And this one from the Boston Globe’s Clerihew contest:

Edmund C. Bentley
Wrote intently,
But would now be anonymous
Were it not for the verse form for which his middle name is eponymous.

Maybe your celebration of this one, if you are feeling creative, would be to write your own Clerihew! Could be a challenge. 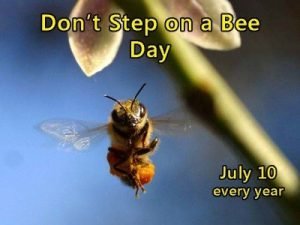 Don’t Step on a Bee Day – Disturbingly, bees have had dramatic declines in their population in recent years. This impacts our lives in a very profound way, as the loss of our bees affects how our plants are pollinated. The production of honey is also put at extreme risk with the loss of bees. So, it seems right that bees should have a special day all their own. Today you can celebrate this one by planting flowers that bees love to drink from, like bee balm and clover. Did you know that there are more than 140,000 beekeepers in the United States? Or that North Dakota is the top honey-producing state in the nation? How about that pollination by the honeybee is valued at more than $14 billion to U.S. agriculture alone? I didn’t either! Let’s show some respect to our bees, be aware EVERY day not to do harm to them. We need them, more than we probably knew thought we did.

Teddy Bears’ Picnic Day – When my daughter was little she had an entire herd of teddy bears and other stuffed animals. (is it technically a herd with bears?) She’d line them up and have tea parties. A Teddy Bear Picnic isn’t much different – actually, I think we had a few of those too. Children get teddy bears as gifts from the moment they enter this world. Teddy bears are comforting. They are there for children to hug, to catch their tears, to play with, and be a part of the world of imagination. Most people keep their bears through adulthood. I did have mine – but they burned in a fire about 28 years ago. If you know where your bears are, maybe today would be a good day to step back into childhood for an hour or so and have a picnic with your Teddy Bear in the shade. Walking down memory lane with our best childhood buddy can sometimes be very relaxing.  We have quite a few teddy bears here at the house – maybe it would be a fun thing to do with Miss B when she comes to stay with us for a few days next month! I think she’d like that!

Do you know the origin of the Teddy Bear? I thought this was really interesting. During the early 1900s, President Theodore Roosevelt was the President of the United States. He was a hunter. While he was hunting in Mississippi in 1902, he refused to shoot a small bear. The Washington Post picked up on the story and made a cartoon out of it. Morris and Rose Michtom, toy store owners, wrote to President Roosevelt for permission to call the stuffed animals they created “Teddy Bears”. The little stuffed bears became wildly popular – beyond anyone’s expectation. Their toy company grew to become the Ideal Toy Company – one of the largest toy companies in the world. Talk about being in the right place at the right time!

1985 – After an unsuccessful attempt to change its formula, Coca-Cola brings back the ever- popular original formula as “Classic Coke”. 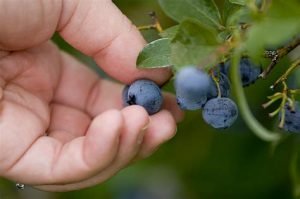 National Pick Blueberries Day – The other day we celebrated National Blueberry Day – a worthy thing to celebrate! Well, since the blueberry harvest starts in early to mid-July, celebrating picking blueberries just adds to the fun! Blueberries are native to North America, they are delicious and incredibly healthy. Over 90% of them are grown in North America and the U.S. is the largest producer. The last statistic I could find was from 2012 when the U.S. harvested a total of 564.4 million pounds of cultivated and wild blueberries. Did you know that the Native Americans called them Star Berries? It’s because the blossom end has 5 points that resemble a star. I’ve never noticed that before, but you can be sure I will pay attention the next time I buy some! Blueberries have the highest level of antioxidants of any fruits or vegetables and are also high in fiber. They are said to also improve memory and brain health, and find (or help to control) Alzheimers, certain cancers, promote heart health and much more.

National Pina Colada Day – When people think of Piña Colada’s it is often in the context of tropical vacations. Today though, you can enjoy one of these delicious, cold concoctions even if you’re going to be at home. If you don’t drink alcohol, that’s OK! Non-alcoholic yummy drinks and desserts are easy to make as well. Just as refreshing and festive, without any possible side effects. The Piña Colada was born in San Juan, Puerto Rico and means “strained pineapple” in Spanish. I went searching for a low-carb recipe for this one and I found it! I may check this out tonight! Thanks to sites like www.lowcarb-ology.com we can have delicious grown up beverages to enjoy without the trial and error of coming up with something new.

May your Tuesday be productive, your plans for the future clear, and your sense of adventure grow with each day on this earth. I am off to plow through a mess to create a clear space for future endeavors. God bless you and I’ll see you tomorrow.

2 thoughts on “It’s a Beautiful Day to Take Some Time and Have a Teddy Bear Picnic!”