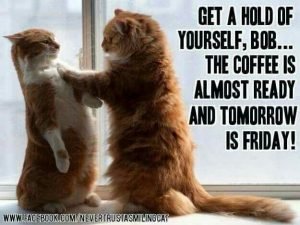 I was absent yesterday. No real reason, I just didn’t feel like writing. It had been a really odd day at work on Tuesday, my brain was tired, so I chose mental self-preservation and went to bed instead of prepping yesterdays post. Wednesday was a better day, and it snowed part of the day, which always puts a smile on my face, and am guessing today will be even better than yesterday.

My righteousness draws near speedily, my salvation is on the way, and my arm will bring justice to the nations. The islands will look to me and wait in hope for my arm.

God’s promises stand through the ages. He has fulfilled them in many different ways. He has punished evil nations, he has redeemed Israel according to his promises, and he has sent Jesus as Savior and redeemer. But most importantly of all, Jesus stands at the edge of history waiting to return and bring full redemption for God’s people and salvation for those everywhere who long for his return.

“Jesus is Lord!” That doesn’t just mean that we have yielded our lives to his will and trusted in his grace. “Jesus is Lord!” This means that everything that is created is his. All angels, demons, and spirits are below him and their purpose is to honor and serve him. Even though demons have chosen not to honor and serve him, that decision does not change what their purpose should be nor the fact that Jesus showed his superiority over them in his crucifixion and resurrection.  It means the universe, with its vast expanse and glory, was made by him and made to declare his glory. As God’s image to us, God’s presence for us to know and see, he is our King, Lord, and Savior. If our life is in his hands and our hearts are yielded to his will, then no one and nothing can prevent his ultimate victory for us and in us.

Everyone expresses grief in different ways, but I can honestly say that making a loud, public spectacle of yourself is probably not the best way to go. Privacy can truly be your friend in those situations and will not make everyone around you incredibly uncomfortable. Just a thought. 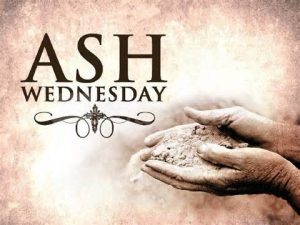 Ash Wednesday – In Western Christianity, Ash Wednesday marks the first day, or the start of the season of Lent, which begins 40 days before to Easter (Sundays are not included in the count). Lent is a time when many Christians prepare for Easter by observing a period of fasting, repentance, moderation and spiritual discipline. During some Ash Wednesday services, the minister will lightly rub the sign of the cross with ashes onto the foreheads of worshipers. Not all Christian churches observe Ash Wednesday or Lent. They are mostly observed by the Lutheran, Methodist, Presbyterian and Anglican denominations, and also by Roman Catholics. Eastern Orthodox churches observe Lent or Great Lent, during the 6 weeks or 40 days preceding Palm Sunday with fasting continuing during the Holy Week of Orthodox Easter. Lent for Eastern Orthodox churches begins on Monday (called Clean Monday) and Ash Wednesday is not observed. The Bible does not mention Ash Wednesday or the custom of Lent, however, the practice of repentance and mourning in ashes is found in 2 Samuel 13:19; Esther 4:1; Job 2:8; Daniel 9:3; and Matthew 11:21.  I wasn’t raised observing this day, but the symbolism is beautiful and would serve as a lovely reminder of what this season is all about.  Take some time today to put your thoughts towards Jesus, what He sacrificed for us, and search your heart for what you need repentance for today.  I know for me, this is a big job – as I’m sure it is for all of us. 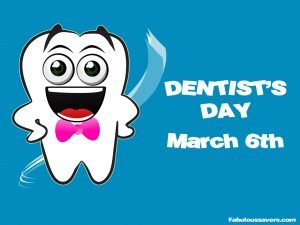 National Dentist’s Day – Sadly, a few year my beloved dentist, a man I trusted implicitly and who never, ever hurt me in all the years I saw him, passed away.  This was the first dentist in my entire life that hadn’t in some way caused me distress or given me a horrible headache.  I was born with very weak and thin enamel, and by the time I was 2 my front teeth had to be pulled and I was humming “All I Want for Christmas is My Two Front Teeth” from then until they actually grew in.  Dentist’s offices were places where I faced fear, pain and suffered nightmares for days afterwards.   About 15 years ago though (gosh, has it really been that long?) I had the misfortune to bite into an almond trail mix bar and broke off my front tooth.  Oh my, it was painful!  I went to a dentist down the street from my office and he put a temporary crown in place, but my gosh, it was AWFUL!  I really wanted a naturopathic dentist, and if possible one who didn’t use amalgam fillings.  I hit the jackpot!  There was one such dentist only about 1/2 hr from home!  He booked me in for an appointment the next day, even had his son pick me up from the ferry so I wouldn’t have to drive in to the boat that day, rather than take the bus.  He was AWESOME!  Not only did he treat his patients as naturally as possible, he didn’t cause me any pain, he matched up my tooth very well, AND he let me pay him in payments since I didn’t have dental insurance!  That just does NOT happen!  A couple years ago I had to break down and find a new dentist.  I went home with a headache, and quite a bit of discomfort – and he didn’t even do much.  After a few visits, some mess-ups on his part and on the part of his staff (as in giving out my private information to someone), I changed dentists again and am actually happy this time.  Whether you love your dentist, or don’t like him, he/she does play a very important role in your life – he/she keeps your teeth strong and healthy and this is something to be very grateful about!  I’m not sure what the statistics are, but fear of going to the dentist is ranked WAY up on the fear list – there’s no need though.  Shop around, don’t settle for someone just because of their degree on their wall.  Find one who treats you with gentleness and respect, and with whom you are completely comfortable.  It’s worth the time and effort to find a great one – and it’ll pay off in dental visits that aren’t painful or fearful!

National Be Heard Day – HELLO!  HELLO?  Is anyone listening?  Today is National Be Heard Day and is a holiday set up as a way for small businesses and entrepreneurs to make their presence known in a world of large corporations, popular brands and big box stores.  It is a day to help the “little guy” find their voices and be heard.  It is good to be seen too.  Use Facebook, YouTube, Twitter, Instagram and Pinterest (or any social networking groups I am unaware of yet) to get your name and face out there.

Mar. 6, 1981 – Well known and loved Walter Cronkite signs off as anchorman off the CBS Evening News. 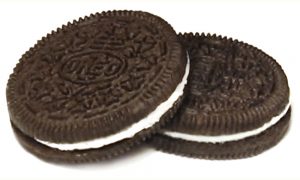 National Oreo Day – What’s not to love about the Oreo cookie?  Most of us have grown up with Oreo cookies. There are probably pictures of many of us with chocolaty remnants smeared across our faces.  There’s even an ongoing argument over the best way to eat them – whether keeping them whole and dunking them in milk or twisting off one chocolate wafer and eating out the creamy middle first.  I personally prefer to twist off the end of mine.  Over the years there have been many recipes created for using them in cakes, milkshakes and other desserts.  This cookie has become a part of our culture!  Did you know that since their introduction in 1912, the Oreo has become the best-selling cookie in the U.S.?  The shape and design of the Oreo didn’t change much until Nabisco began selling various versions of the cookie.  In 1975 they released Double Stuff Oreos. There are many other flavors out there now, but I’ve only ever really liked the original version.

National Cereal Day – Rice Krispies mascots Snap, Crackle and Pop used to have a fourth brother, Pow. Around in the ’50s, he was created to represent the nutritional impact of the cereal.  I remember when I was little, we always had cereal in the house.  Dad loved Shredded Wheat . . . I liked it a little then but love it now.  It gets pretty squishy, so you have to eat it quickly!  My VERY favorite back then was Honeycomb.  Do they even still make that?  Of course, Captain Crunch was right up there on my happy eating list, never even knowing how terrible it was for us – all that sugar! It’s a wonder our generation even has teeth left.  I thought this was an interesting bit of history regarding the start of cold cereals . . . John Harvey Kellogg served the first breakfast cereal during the week of March 7, 1897, to patients at his sanitarium in Battle Creek, Mich. He and his brother “invented several foods made from grains, which were forced through rollers to make long sheets of dough. Called away while cooking wheat one day, when the brothers returned the wheat seemed overcooked. Funds were tight so they decided to put it through the rollers anyway, and as each wheat berry was flattened it emerged as a thin flake — they had accidentally invented ‘flaked’ cereal, and the Sanitarium became famous for its wheat and corn flakes”.  Way to make a good thing out of an “oops”, right?  One of the things that people who eat low carb generally do without is cereal. I’ve seen a couple of recipes that make me skeptical about how they taste, especially considering that one of the ingredients in one of them was crushed pork rinds. I don’t mind it as a breading in meat dishes, but I can say that I personally must draw the line at pork rinds in my cereal bowl. *shudder*.  I did find a couple of really, lovely granola and cereal recipes that would qualify in my mind as cereal though.  Here’s one by Kim at Low Carb Maven that I made last year, that is absolutely delicious!  This one from Carolyn at All Day I Dream About Food is pretty amazing too!  YUM!  I can’t decide which one I liked better, but here are a few pictures.  The first picture is Carolyn’s Banana Nut Hemp Cereal, the second is Kim’s Really Good Low Carb Granola – and she should honestly have called it Really GREAT Low Carb Granola. They are both awesome. 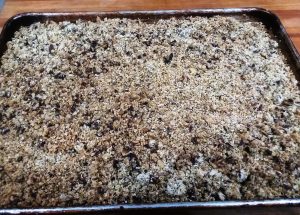 As I head off to work, I can honestly say, I am so incredibly happy that I have made up all of my snow days and have tomorrow off! I have a list of things to accomplish and finally a day to accomplish them.  Have a wonderful day! God bless you and I’ll see you tomorrow.