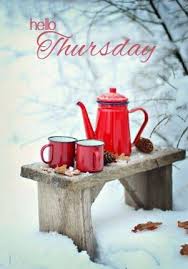 Hi Ho, Hi Ho, It’s back to work I go . . . You can probably hum along with the rest of the song – at least if you’re old enough to remember the original Snow White cartoon. I’ve had a wonderful 5 days off, but like with all holidays or vacations, it must come to an end.  There is a silver lining though. It’s back to work for two days, then off for three again.  I won’t be fussing about going back to work today for sure.  The last two days I have taken it easy, since the rush and bustle of Christmas had me on perpetual GO for the last few weeks.  I needed this time to just stay in my PJs, putter around the house and relax.  I did manage to make a little lip balm yesterday. They just need labels.  I didn’t take the time to make candles. That’s a bigger undertaking and I didn’t feel like making that much of a mess.  Maybe this weekend.

No one has ever seen God, but God the One and Only, who is at the Father’s side, has made him known.

Jesus is God’s greatest message. He not only proclaims and declares God’s love, mercy, and grace, he has made it known. Only Jesus can display God to us fully, for he is one with the Father. Yet when we “see” Jesus ministering in the Gospels, we see God. If we want to know how God feels about us, all we have to do is look at how Jesus ministers to others. If we want to know what God would do for us, we can notice what Jesus does to bless others. Jesus is our window to the Father’s heart. So as this year winds down, and as you stand in the afterglow of Christmas, why not make a commitment to get to know Jesus better in this coming year by spending more time with him in the Gospels (Matthew, Mark, Luke, and John). If you do, you will better know God!

I am still watching Christmas movies, since we had several dozen recorded, and I am noticing a very sad and disturbing trend. Fake snow.  Fake snow falling, fake snow on the ground and not even a small attempt to make it look real.  If it is snowing and you walk outside, it lands on your head, your shoulders, your face . . . you get the point.  If it’s cold outside you can see your breath. If there is snow on the ground it doesn’t look draped like a cotton blanket. I realize that these aren’t big screen films, and the actors aren’t always very good, but seriously, a SLIGHT attempt at realism would be awfully nice! What is YOUR biggest pet peeve with movies and the things they mess up?

Card Playing Day – I have so many wonderful memories connected to playing cards.  My parents played different games with us when we (my brother and I) were growing up – games that helped us learn to count, add, plan strategy, and learn sportsmanship.  Today is the chance to spend an hour or so playing cards with family and/or friends.  It’s really a great time of year for it – it’s a few days after Christmas, the busy-ness of the season is winding down, and it’s a good time to just relax, slow down, and have a little fun.  Card games have been around for centuries as a form of play and entertainment.  Yes, there are some people who are serious gamblers and see cards as business, but to most of us it’s all just fun and games.  Have fun!

Holy Innocents Day – I have read the story of the birth of Christ my whole life, and for all of that time my heart has ached for the children slaughtered by Herod, but beyond a verse or two, there isn’t much said about the murder of those precious children.  The first time I had actually heard of this celebration was when I started writing this blog. I’m not Catholic so it never was one that crossed my path – but I was fascinated and touched to read about this day honoring the children lost to the viciousness of a cruel man.   A little bit of background for anyone who isn’t aware of the incident I am talking about . . . Herod the Great was the Governor of Galilee.  He was an Idumean Jew that history describes as extremely cruel.  He killed several of his wives and his own sons when he suspected they were plotting against him.  Challenges to his power were dealt a swift and final response, and he even tried to make his cruelty carry on after his death by arranging that on the day he died hundreds of men in the area would be killed so that there would be mourning at his funeral.  His arrangement wasn’t carried out . . . but it did speak to his nature all the way to the last of his days.  During Herod’s reign the Magi, whose adoration of Baby Jesus is remembered on the Epiphany on January 6th, saw the Star of Bethlehem and went to Jerusalem, asking where they could find the new King of Jews.  When Herod heard that they were asking about the newborn King, he was informed that it was prophesied that the Child would be born in Judea.  Herod felt threatened by this prophecy and sent for the Magi, told them to find the child, then report back to him so he could go and worship him also.  The Magi found Jesus, but God had told them in a dream that Herod meant to harm Jesus, so they didn’t go back as they were instructed.  In the meantime an angel had warned Joseph to take Mary and Jesus and flee to Egypt.  When Herod found out about the betrayal of the wise men, he became enraged and ordered that all the baby boys in Bethlehem who were two years old and younger be killed.  The fourth day of Christmas commemorates these baby boys, who were considered the very first martyrs.  Bethlehem was a small town, so it is estimated that there were probably no more than 25 baby boys murdered, but this was still a lot of innocent lives shed for no reason.  These innocent martyrs died not only for Christ, but in His place. The consolation in all of this is that these children were in the arms of God that day, and their sacrifice will be remembered and honored forever.  As a mother, and a grandmother, I cannot help but feel the grief those mothers felt deep in my heart.  I can’t possibly know their exact feelings and emotions, but I can imagine the heart wrenching horror at having a mad man rip my child from my arms and slaughter them.  It’s a horrific thought and one that has me asking everyone to remember these innocent children and honor their sacrifice, and the pain their parents and families felt.

Pledge of Allegiance Day – I am proud to be an American, and as such, am proud to say that I have always said the Pledge of Allegiance – hand held over my heart – with dedication and meaning every single word of it.  This is something that I feel to the core of my being, as do the majority of other proud and patriotic Americans.  We were raised saying it in school and at various public events.  It is a part of the blood flowing in our veins, and is interwoven with the love of our country, which is as it should be.  It seems utterly ridiculous that anyone would object to this Pledge of loyalty to our nation, and to our flag, yet it has been challenged in court that children should not be subjected to saying the pledge, with the ludicrous declaration that it is a violation of their rights. Utter stupidity, in my opinion.  The court has ruled that the minority objecting do not have to participate, but that they can also not silence the recitation of the daily pledge, as it is also the right of those who wish to say it, to do so.  Thank God for that bit of intelligence on the part of the Supreme Court, since they have made so many bone-headed decisions lately that utterly desecrate the rights of so many to appease the noise making, liberal squalling that goes on daily.  Teach your children the pledge, not only the words, but the meaning behind them.  Give them the history lesson that we learned as children, hopefully at our parents and grandparents knees.  Help them to learn the deep and true conviction that love of country and flag fills true patriots; that they may fight to uphold our constitutional rights as they become the next generation responsible for the continuation of our nation.  From what I have seen and read lately, we have a very slim chance of coming out the other side unscathed, but where there are people who love our nation there is hope for the future. It is up to use to lead the next generation to where they need to go – don’t leave it up to the teeth gnashing idiots who seem to have turned this beloved nation into a bunch of PC spewing, mind numbed robots.

I Pledge Allegiance To The Flag

Of The United States Of America

And To The Republic for Which It Stands

One Nation, Under God, Indivisible

With Liberty And Justice For All.

There are very few things more beautiful or moving, than an entire group of America loving people, hands over their hearts, hats off of their heads, declaring their love of this nation by reciting the pledge.  Please take the time to find a flag, and meaning every single word, recite the Pledge today, and every day.

This Day in History

National Chocolate Candy Day – The Hershey Co. got its start making chocolate coating for caramels in 1894. It wasn’t until 1900 that Hershey introduced the now-legendary milk chocolate bar.  Can you seriously think of a more tasty food celebration? Me either! I think most chocolate fans will definitely agree.

Normally chocolate would sound good to me but after the food frenzy of the last few weeks, it doesn’t sound even remotely good to me right now. Of course, it’s 5:45 in the morning, so not much sounds good this early besides my coffee.  This status is subject to change as the day goes forward!  Right now, I need to make lunches, breakfast smoothies and get myself ready to go.  Have a fantastic Thursday! God bless you and I’ll see you tomorrow.