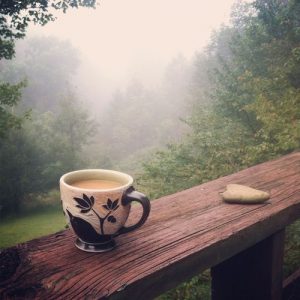 The smoke/haze/fog/mist is thicker today. I can hear ships sounding their horns as they navigate their way through the canal, the light house horn answering them. At least that is what it sounds like. The air has cooled down quite a bit, and I find myself begging God to bring rain to the entire west coast. We usually get so much rain that we are all begging for it to stop, but right now it is so needed to wet everything down and help put out all the fires. I know that air quality is a big problem for people with breathing issues, so I feel for them too. My Mom just called, and where they are up on a hill, the breeze is blowing the smoke directly at them, so her asthma is acting up right now.

My car is all loaded up and I am getting ready to head out to drop things off at the thrift store, go run a few errands and get back home in time to steam clean the high traffic areas of our carpet. I know how to party, don’t I? Tonight, after Hubby gets home, we will finish pressure washing the front of the house. The back will have to wait until after Miss B’s visit is over. There is always a chore to do, isn’t there?

Since we have these promises, dear friends, let us purify ourselves from everything that contaminates body and spirit, perfecting holiness out of reverence for God.

In a world so full of distractions and temptations, purity is difficult. Even more than difficult, the call to purity often goes forgotten and ignored. “Cheap grace” (Jude 4) is substituted for a call to passionate living. While we never want to give in to a works righteousness, we also must remember that impurity through laziness or lack of commitment or simple rebellion are contaminating to those claiming to be Christians and ruin our influence before the watching world.

Does it ever annoy you when someone else has a problem, deliberately puts themselves into a situation where they are dealing with that problem, but they try to put it onto other people to make it THEIR problem? It is different if you are dealing with a work situation where the employer is mandated to make accommodations for a disability, but if someone with a disability puts themselves into a recreational situation where their problem gets worse, that’s pretty much THEIR problem, right? I’m specifically shaking my head at a woman complaining on a camping group site that she has asthma, and everyone wouldn’t put out their campfire to make her feel better. Since there are still camp fires allowed in some campgrounds in approved rings, why on earth would she put herself into that situation at all? When you combine that with the fact that the entire state seems to be filled with smoke, doesn’t it just make more sense to stay home? Geesh. Some people.

Joe Miller’s Joke Day – Who was Joe Miller? Well, he was an English comedic actor who was born in 1684 and a very popular act at the Drury Lane Theatre in London.  He died on August 16, 1738 and within a year a friend had put together all of Miller’s jokes into a book with a very long title.  Ready for it?  It’s long . . . “Joe Miller’s Jest Book: An Immense Collection of the Funniest Jokes, Quaint and Laughable Anecdotes, Mirth Provoking Stories, Brilliant Witticisms, and Queer Sayings, As Told by the Original Joe Miller.” The friend may not be all that great at choosing a title for his book, but it was awfully wonderful that he immortalized his friend that way. This day can be celebrated by telling your favorite jokes! 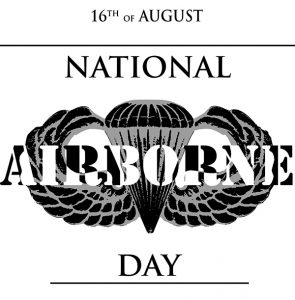 National Guard Bureau WASHINGTON, Aug. 9, 2001 – Sixty-one years ago, 48 brave volunteer members of the U.S. Army Parachute Test Platoon pioneered a new method of warfare. Their successful jump led to the creation of a mighty force of more than 100,000 paratroopers. Members of this force were assigned to the legendary 11th, 13th, 17th, 82d and 101st Airborne Divisions and numerous other units that fought in every theater during World War II. The soldiers of the Parachute Test Platoon also forged a unique warrior spirit, a relentless passion for victory, and a reputation that still strikes fear in potential adversaries. Beginning with the first combat jump by the men of the 2d Battalion, 503d Parachute Infantry Regiment, over North Africa in November 1942, airborne and special operations soldiers have made a total of 93 combat jumps. Since World War II, paratroopers have continually distinguished themselves in battle, earning 69 Congressional Medals of Honor and hundreds of other awards for valor.

Today, as we celebrate the anniversary of the first official Army parachute jump, I join all Americans in recognizing these heroes. We salute our Nation’s sky troopers, both past and present, for their great service and personal sacrifice in the defense of freedom and liberty around the world.

Best wishes to all for a memorable observance.

National Rollercoaster Day – On August 16, 1898 the roller coaster was patented.  Since that day it has become one of the world’s famous thrill rides at amusement parks all over the world.  Its architecture has been changed quite a bit to accommodate rides for people of nearly all ages and interests – from tunnels to waterfalls to upside-down spirals!  if you look long enough you’ll find one that gets your adrenaline going.  Here are a few interesting roller coaster facts:    * Six Flags Great Adventure in Jackson Township, N.J., has the world’s tallest and country’s fastest roller coaster. The Kingda Ka is 456 feet high and reaches 128 mph in just 3.5 seconds. * The Fuji-Q Highland Amusement Park in Japan has the world’s steepest roller coaster. The Takabisha climbs 141 feet and then plummets at a 121-degree vertical drop. * The world record for the longest continuous roller coaster ride was set by Richard Rodriguez in 2007, when he rode the Pepsi Max Big One at Blackpool Pleasure Beach in the UK for 17 straight days! 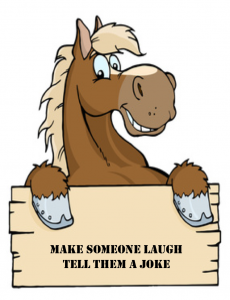 National Tell a Joke Day – How many of us struggle with getting the timing just right when we tell a joke?  I do! I just can’t seem to get it right and lose my listeners along the way.  A good joke told properly has the right tone, the right speed and the perfect timing to draw people in, then WHAM the punch line comes through and everyone is laughing hysterically.  I know it when I hear it, but I can’t do it myself.  I’d love to . . . but that’s why I am NOT a comedian.  However, I do appreciate a great joke and will find and post one to get you started on your day with a smile and maybe even an outright laugh! I featured these last year too, but I couldn’t find any I liked more. Ready?

A couple had two little boys, ages eight and ten, who were excessively mischievous.

The two were always getting into trouble and their parents could be confident that if any mischief occurred in their town, their two young sons were involved in some capacity. The parents were at their wit’s end as to what to do about their sons’ behavior.

The parents had heard that a clergyman in town had been successful in disciplining children in the past, so they contacted him, and he agreed to give it his best shot. He asked to see the boys individually, so the eight-year-old was sent to meet with him first. The clergyman sat the boy down and asked him sternly, “Where is God?”

The boy made no response, so the clergyman repeated the question in an even sterner tone, “Where is God?”

Again, the boy made no attempt to answer, so the clergyman raised his voice even more and shook his finger in the boy’s face, “WHERE IS GOD?”

At that, the boy bolted from the room, ran directly home, and slammed himself in his closet. His older brother followed him into the closet and said, “What happened?”

The younger brother replied, “We are in BIG trouble this time. God is missing, and they think we did it!” 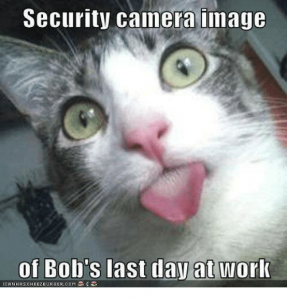 Surveillance Day – Do you ever feel like you are always being watched? No . . . I’m not paranoid and you likely aren’t either.  The truth is that pretty much we are always being monitored by “Big Brother”.  In my opinion, it has gone too far and violates our privacy.  Yes, in the cities it does seem to help with catching bad guys, but I certainly don’t want my every move watched.  Have you ever watched the show “Person of Interest” on TV?  It’s one of my favorites but paints a grim picture of just how private anyone really is these days.  Catch the series on Netflix – you’ll see what I mean.  Today look around and see where the cameras are, and wave at them!  Let the people watching that you are aware of them.  I’m sure their lives are pretty boring just watching other people live their lives. 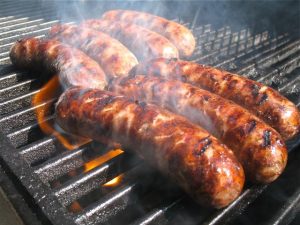 Bratwurst Day – We have celebrated hot dogs already this year, probably more than once, but today we dedicate to Bratwurst.  Grilled brats are at the top of the list of favorite summer foods for many Americans, enough that now they have their own day! I’ve never really known what the difference is but apparently the combination of meats (pork and beef or pork and veal), the coarse grind, a natural casing and a variety of seasonings make them different from hot dogs. And I can say it’s true since when we visit Leavenworth, WA we always go to the brats and beer restaurant and the brats there definitely are more flavorful and filling than a boring hot dog.  There are 42 different varieties of bratwurst, and even a museum to celebrate them. One of the first documented cases of food purity laws was about bratwurst in 1432. The law stated that rancid pork, meats other than pork and parasites were expressly forbidden in the production of bratwurst. Gosh, I would hope that would have been a no-brainer, but apparently it wasn’t. Another thing I thought was interesting was that brat aren’t smoked or cured, they are always sold fresh. I was going to make a stir-fry tonight but now I’m wondering if I should pick up some brats!

National Rum Day – Our national love affair with rum began in the colonial days. By the 1770s, an estimated 4 million gallons of the stuff were imported from the Caribbean each year.  I’m no expert in anything related to rum, but I DO know that rum cake is yummy, and I’m not opposed to those fruity tropical drinks with the little umbrellas.  I have also made some delicious butter cream frostings with various rums that are wonderful!  Though this feels more like a winter treat to me, if you feel like creating some delicious rum balls, here is a low carb version from All Day I Dream About Food.  I’ve been meaning to try them, but I haven’t been doing more than I absolutely HAVE to in the kitchen during the hot time of the summer. As much as I love baking and creating goodies, it just has not been all that appealing.  I think that this keto blueberry mojito sounds delicious though! I have everything I need except mint leaves, which I will stop to get today! YUMMY! Create something rummy today!

I’m ready to get out of here and run my errands. I don’t want to be gone all day like I was on Monday. God bless you and I’ll see you tomorrow!