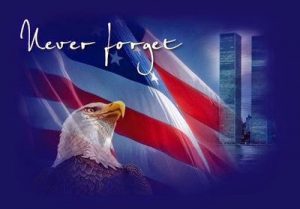 Never Forget . . . 9/11. When I close my eyes and think about it, I can remember vividly the moment I found out what was happening, and the rest of that day going along like it couldn’t possibly be real.  I remember watching the Seattle skyline and wondering if the same thing was going to happen on our coast . . . the surreal feeling of not seeing or hearing any aircraft flying overhead. It is so hard to believe that those moments were 18 years ago. The mere mention of this date brings a hush and sense of overwhelming sadness to the soul of every red-blooded American who remember it, and should for everyone who hears about it, even if they weren’t. We can all recall the precise moment when we heard what had happened on that horrible day in New York, right here on our home soil, to hard working men and women, to a city, a nation, the world. It was the day when we were stripped of what innocence remained, naked and without the sense of being protected by the very strength of the borders within which we live. It was the day that we realized that we too are vulnerable to the evil that pervades the world and we are no longer insulated from that evil. We can no longer count on the safety that we have taken for granted for so long. 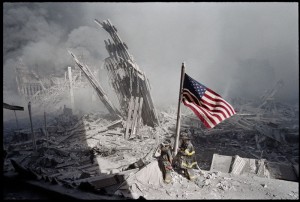 On that day we came together as a country, of one mind . . . one heart . . . one goal. We bonded together, across this nation, every walk of life, every religion, every ethnicity, every political affiliation . . . we united to rebuild, to heal, and to NEVER be victims of such senseless violence again. In the 18 years since that day, though it seems as if it were just yesterday, we have deteriorated back to a nation of back biting, fighting, clashing and finger pointing. No, worse, we have deteriorated back to a time of racial tensions, discrimination against Christians for expressing their faith and doing business according to that same faith, and to a place where it is accepted socially for an organization that fronts as a women’s healthcare facility brutally murders innocent unborn babies, and picks through their tiny body parts to sell for profit. How quickly the memories of such devastation fade for those who have limited capacity to love our country for what it is, what it has been, and what it could potentially still be. How quickly the selfishness, hypocrisy, hatred and plotting one against another fall back into the old routine, and worse. It is as if the pain and horror of that fateful day never happened. 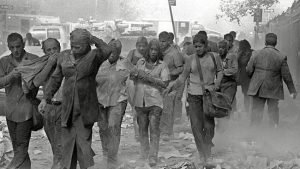 To those who seek to push our country down the path of destruction through stupid policies, through quest for power, through greed for more of what our neighbor may have, SHAME ON YOU! To those who walk on the graves of men, women and children who died that horrible day, remember that judgment day is pending for those who still walk this earth, and God is the ultimate judge. While you are busily pushing Him out of our schools, out of our public places, out of the government which was built in His name, and out of the holidays we celebrate in His honor – He is recording your actions, your thoughts, your words and the day is coming when you must relive them . . . through His eyes. At that point it will too late to wish He have mercy on your soul. None are free of sin, but some seem to perpetrate it on purpose and with glee and malice for the innocent, the honorable, the devout. 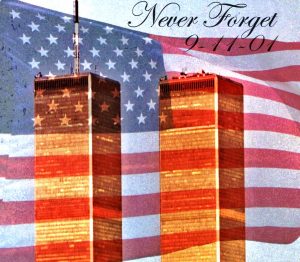 Please, take a moment to pray for the families and friends of those who perished on 9/11. Pray for those who so valiantly worked to save as many as they could. Pray for the men and women who have served, and still serve, in our military, striving to protect our nation against such heinous violent acts from happening again. Pray for the families of those who serve. Pray for our country, for the preservation of the constitution on which we have built our very existence. Pray for our President who is loved by so many patriots, yet is also hated by the squalling, screaming, hate filled masses who want to take away our freedoms and turn our nation into a cesspool of socialism. They are blinded to the great things that are happening in our country as they wallow in self-pity that their “side” lost. We are all residents of this nation, and for all citizens, like it or not, we have the same President, the same leaders and the same flag. It is up to use to unite and become once again the way we were on that horrible day in 2001. 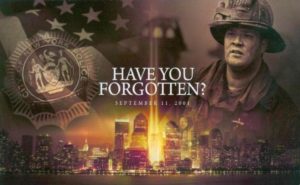 I read somewhere that two years was the first year that freshmen in high school will be learning about these events from the point of history, rather than of someone who was alive and going through them.  Don’t ever forget, keep these events alive in the minds of the generations to come . . .  It is our duty as human beings, as Americans . . . Honor this day and always remember.