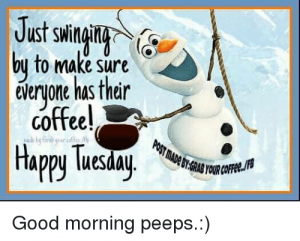 It is Tuesday! Did you get everything done on your Monday list?  I think I made a good dent in it! There’s never enough time for me to get everything done on my list, but I try to get close at least.  If I could just somehow magically double my speed and reduce my need for sleep without resorting to drugs, that would be great, wouldn’t it?  We went to town to get the last of the stocking stuffers last night, and now all I need to do is assemble them! I was sort of in a fog in the stores though – unsure of what to get.  I may need to make a quick stop after work on Thursday to pick up a last minute few things.  I have a feeling Baby R’s stocking will be a bit empty at this point. It’s not easy to stuff a stocking for one so young – he doesn’t eat candy and stuff like that, toys have to be big enough for him not to choke on them, so I’ll get creative once I see how it all looks tonight.

Restore us, O LORD God Almighty; make your face shine upon us, that we may be saved.

In the days of Jesus’ birth, there was a group of devout and lowly people who still looked for God’s redemption. They knew that salvation could not, and would not, come without great cost — not just to themselves, but also to God. Isaiah had hinted about this in his Servant Songs (see Isaiah 53). They had experienced in their own history. So with honest hearts, they confessed that they didn’t have the power to bring salvation and deliverance. This power had to come from God and had to be released to people who were seeking God’s transformation in their lives. They needed to ask God for it! They needed to seek his face, his presence, in their daily lives. So must we!

Have you ever celebrated with Christmas Crackers? Do you even know what they are?  I’ve seen them in stores on occasion, but I’ve never purchased any, so I wasn’t REALLY sure what it was all about.  These are a traditional Christmas favorite in the UK that were first made somewhere between 1845 and 1850 by a candy maker in London – Tom Smith.  He had seen the French ‘bon bon’ sweets (almonds wrapped in pretty paper) and though they were fun.  He came back to London and tried selling sweets like that, also including a riddle or a motto. They didn’t sell very well.  There is a story that one night while he was sitting in front of the fire he became very interested by the sparks and crackling sounds that were coming from the flames.  He suddenly thought it would be a fun idea if his sweets and toys could be opened with a crack when the fancy wrappers were pulled in half. When Tom died his growing cracker business was taken over by his 3 sons – Tom, Walter and Henry.  Walter introduced the idea of putting hats into the crackers, also traveling around the world looking for idea for gifts to put in them as well.  There were many themed crackers introduced by the company – some for bachelors or spinsters with silly gifts like false teeth or wedding rings; there were crackers for suffragettes (women who campaigned for women’s right to vote); for war heroes and even for Charlie Chaplain!  Crackers were also made for special occasions like royal coronations. The Royal British family still has special crackers made for them each Christmas.  To top all of this off, there were also crackers called “Millionaire’s Crackers”.  These special ones contained a solid silver box with a piece of gold and silver jewelry inside. Well, shoot, this makes me want to start looking into these for next Christmas – the regular ones, not the millionaire ones! They sound like fun!

When tragedy strikes it is always awful, but when it strikes this close to Christmas it seems to be extra heart wrenching.  This morning around 7:30 a.m. PST a passenger train going from Seattle WA to Portland Oregon derailed, sending 2 train cars onto I-5 below.  There are multiple fatalities and many injured.  Please keep the victims and their families in your prayers, and please remember – we never know if we will be getting a tomorrow.  Put away any petty and ridiculous issues, make-up with those you have had harsh thoughts or feelings about, and cherish the living because we never know when that may change and we won’t get another chance to make things right. 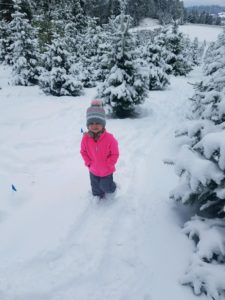 Look for an Evergreen Day – I am a strong advocate for having a real Christmas tree, and I know that many people feel the same.  The aroma of a fresh cut tree is amazing and puts me directly into the Christmas Spirit.  They look better than fake trees too – you just can’t duplicate the beauty of a real tree! Throughout my life I have either gone out to a Christmas Tree Farm to get our tree, or up to the mountains with a permit from the forest service to get one from the wild. Both are wonderful experiences, though for fun going into the mountains can’t compare to anything else – it’s just so much fun! However, that’s something we choose to share with the kids and grandkids when they can go. It’s just not the same without the enthusiasm of someone a little (or a lot) younger than we are.  This year we weren’t able to take Miss B and Big Brother E out to the tree farm to tag a tree because they moved away.  They were very lucky this year and got to go out to a tree farm where they live now and look for a tree in the snow!  How wonderful for them!

Oatmeal Muffins – Mmmmm Oatmeal!  This is one thing I truly miss while eating a low carb diet.  There is just something so comforting about anything with oatmeal in it!

I am heading out to work with every intention of checking off the rest of my Monday and Tuesday lists so I can focus on baking cookies tomorrow. Once work is over, I’m on it!  How about you? Have a fantastic day! God bless you and I’ll see you tomorrow.