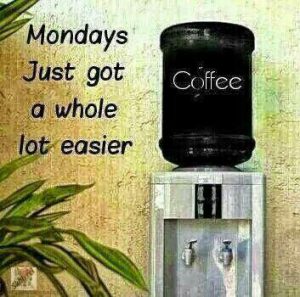 Hubby and I were off for an adventure on Friday.  I started writing to you as he drove along, since he did build me a nice desk top on the dash of the motor home, but I started getting seriously motion sick within just a couple of miles so I gave up.  I figured I’d just get settled at the campsite, find a spot with a great view, and write from there, but there wasn’t any internet connection where we went camping! I had no idea that even my hot spot wouldn’t work. What did I do instead? Well, we walked on the beach, sat by the campfire, drank some wine, ate great food prepared in the outdoors, and sat by the fire some more! I know, sounds awful, doesn’t it? Seriously, this was an amazing camping trip, so even though I am sorry I didn’t get things posted, I’m not sorry – if that makes any sense.

This is a picture of the view from our campsite – doesn’t get much better than that, right?

I pray that out of his glorious riches he may strengthen you with power through his Spirit in your inner being.

Life is so toxic lately, that sometimes when we get away, it’s also good to unplug from all of that and just listen to God’s beautiful, peaceful and healing creation. As I stood on the beach this weekend, listening to the song of the waves rolling onto the shore, followed by the chorus of the pebbles being tickled by the water as the waves receded, I was humbled by the power and majesty of it all. I could feel my heart and soul begin to heal as I stood there at the water’s edge.  I didn’t realize how much I really needed to get away, and I am so grateful for a Hubby who will make these weekends happen as often as possible. 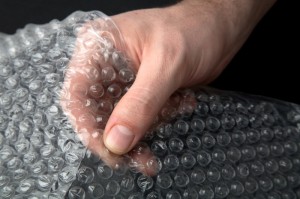 Bubble Wrap Appreciation Day – (last Monday of the month) – How many of us LOVE LOVE LOVE popping the bubbles on bubble wrap? I know I do! It’s entertaining and it’s many times even therapeutic. If you’re having a horrible day, making some racket popping all of those little bubbles will just make it all better. It isn’t difficult for me to figure out why someone actually set aside a day to appreciate this amazing invention. Have you ever wondered how Bubble Wrap® packaging is made? Well, it starts as a plastic resin, in the form of beads about the size of pea gravel. The beads go into a long cylinder with a screw inside that runs its entire length. As the screw is turned, heat builds up and the resin melts into a liquid that is squeezed out of the cylinder into two stacked sheets of clear plastic film. One layer of the film is wrapped around a drum with holes punched in it, and suction is applied drawing one web of film into the holes that form the bubbles. The second layer of film is then laminated over the first so that when the two films are joined, they stick together and trap the air in the bubbles. This may sound easy, but polyethylene (the plastic) is a porous material like a sponge. Air can easily leak out through the pores, which tends to limit the cushioning ability of the packaging. Realizing this, the manufacturer started using a Saran coating to seal the air in the bubbles. Eventually, a method of creating an air retention barrier in the plastic during the extrusion process was developed. This process though, is a trade secret. In 1957, in a garage in Hawthorne, NJ, two engineers – Marc Chavannes and Al Fielding invented bubble wrap. Marc and Al were trying to make a plastic wallpaper with a paper backing. Surprisingly, this product didn’t take off. They realized, however, that their invention could be used as a cushioning packaging material. At that time, only abrasive paper products were used for packaging, and they weren’t very good for cushioning heavy or delicate items. Marc and Al raised $9,000 to fund a developmental production line. They incorporated Sealed Air Corporation in 1960, and today, Sealed Air is a leading worldwide manufacturer of numerous protective and specialty packaging materials with annual revenues exceeding 3 billion dollars. Not too shabby for what turned out to initially be a failed invention for something else! Bubble Wrap® Appreciation Day was started by “Spirit 95” Radio, an FM radio station in Bloomington, IN in 2001. They held their 1st annual Bubblympiad with games such as a Bubble Wrap® popping relay, Pop-a-Mole (similar to a well-known carnival game), and sculpture and fashion design contests. I looked up things made with bubble wrap! Oh, my gosh – do a search! There are clothes made of bubble wrap that had me giggling my head off! So funny!

National Kazoo Day – Did you ever play a kazoo with the rest of the class in elementary school?  It was the one instrument everyone could play with a little bit of proficiency.  Remember how it made your lips tickle while you were playing it?  Ah memories.  People love kazoos, no matter their age, and today we celebrate the joy and childlike feeling that this instrument brings.  In the 1840’s a man by the name of Alabama Vest of Macon, Georgia thought up the kazoo, and explained it to Thaddeus Von Clegg, a German clock master, so he could make it to his specifications.  Commercial production of the Kazoo didn’t happen until many years later, in 1912.  Emil Sorg of Western New York started up manufacturing with Michael McIntyre, who was a Buffalo tool and die maker.  They moved production to Eden, New York where the factory museum still stands today.  So, if you haven’t happened to ever play a Kazoo, do you know how to play it?  It’s quite simple!  You just hum a tune into the kazoo and you’re an expert! 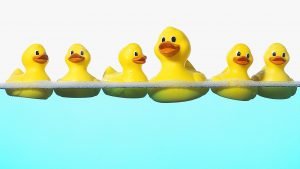 Rubber Ducky Day – Well, I can’t find the origin of the rubber duck, but we can link its history to when rubber manufacturing began in the late 1800s.  I found the name Bryn Shaffer linked to the creation of the first rubber ducky. She created it to keep baths from being boring and chose the color yellow because it was happy.  I can’t find anything to back this up, just a few random comments by various people.  So, IF she did, good for her!   The earliest versions of the ducks were made from harder rubber, and they didn’t have the little squeakers in them.  In 1970 Jim Henson made the rubber duck popular when he had Ernie from Sesame Street perform the song “Rubber Duckie”.  Ernie often carried his rubber duck with him on the Sesame Street show and spoke to it often.  Today there are all sorts of rubber ducks, and you can find them in various costumes and colors, including soldier ducks, bride and groom ducks, cowboy ducks, etc.  Really, there’s no end to what you can find out there.  In 2001, The Sun, a British tabloid newspaper reported that Queen Elizabeth II has a rubber duck in her bathroom that wears an inflatable crown.  it was spotted by a workman who was repairing something in the bathroom.  That story increased the sale of rubber ducks in the United Kingdom by 80% for a short period of time.   Regardless of what prompts the sales, and what color or costume they wear, Rubber Ducks are pretty cute and I’m certain we all should have at least one! 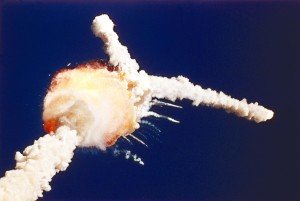 Space Shuttle Challenger – 33 years ago today, January 28, 1986, many of us were watching the live news footage as the space shuttle Challenger took its fateful launch.  We watched with our hearts in our throats and tears streaming down our faces, horrified as 73 seconds into the flight the shuttle exploded, killing seven people, including Christa McAuliffe.  Ms. McAuliffe would have been the first teacher in space, chosen out of 11,000 applicants.  The explosion was caused by a rocket booster failure that ignited the fuel tank. It just doesn’t seem that long ago and watching the video of the launch and explosion bring it back like it was yesterday.  At the same time though, with the retirement of America’s shuttle fleet 3 years ago, it somehow feels a bit like ancient history as well.   In the past 28 years the Challenger disaster has been used as a case study in what NOT to do in engineering safety decision-making processes, discussions, and workplace ethics presentations.

To the families and loved ones of the crew that perished that day, we remember, and we honor them:  May the memories of the crew of shuttle Challenger flight TS-51L live on forever:

Remembering these events in our history, never letting them fade away, is so important.  God be with the families of these brave men and women and may their memory and their sacrifice live on.

I was going to try to make up for everything from Friday through Monday, but seriously, that was a very long list and just wasn’t going to happen! Looking forward instead of backward is always a good thing anyway. Have a wonderful week and a fantastic Monday! God bless you and I’ll see you tomorrow.