Skip to content
If you, or a family member, suffer from repeated sinus infections or upper respiratory nastiness, you’re probably tired of trooping to the doctor for medicine to fix them.  Antibiotics are a miracle discovery that have saved many lives, and continue to do so every day.  The problem is that bacteria are “smart” critters that work overtime to adapt and overcome, and have gotten very good at it. Scientists struggle to keep up with the demand for newer, stronger antibiotics to continue killing the bacteria as they evolve and mutate.  Should we immediately turn to antibiotics as soon as we get sick, or is there another solution we can try first?  I prefer to save antibiotics as a last resort, primarily because years ago my daughter suffered from constant and repeated ear infections. She’d get one, we’d go in, they’d prescribe meds, she’d get over it but it would have also destroyed her natural flora in her system, which lowered her resistance to infections, and the whole thing would start over.  After four sets of ear tubes, adenoid and tonsil removal, and twelve years of round . . . after round . . . after round . . . of antibiotics we learned a hard lesson.   She suffers from a significant hearing loss in both ears, balance issues, etc.  It’s a long and ugly story, but suffice it to say, we learned to save the medicine for a last resort.   God gave us EVERYTHING we need in His amazing pharmacy right here around us.  In nature we find the perfect solution to so many problems that are easily addressed.  Save western medicine’s chemical pharmaceuticals for last resort emergencies – they have their place but try God’s natural treatments first.  He gave us doctors, but He also gave us herbs, brains and an ability to put them together to create His solution for little ills.
Today I am going to share with you an incredible recipe given to me by a dear friend, and licensed herbal practitioner years ago.  We went from going to the doctor every eight weeks for my ex-husband to get antibiotics for sinus infections and my daughter for ear infections, to ZERO visits.  These issues were cleared up within a few days, without any more trips to Urgent Care.  If the symptoms persist beyond a few days without reduction in severity, it is worth a visit to the doctor to see if something else needs to be done.  As a first resort though, this has saved considerable time, money, pain and struggle.  You may have to force it into the kids at first, but they really do adapt.  It took chasing my daughter around the room several times, finally tackling her, and shoving a spoon into her mouth the first few  treatments, but eventually she knew I wasn’t going to give up on her and she took it – with a frown, a squawl and some tears – but she took it nonetheless.  My son?  He’s a little weird.  He liked it right away – said it tasted like cole slaw with an attitude.  I have to say, I agree with him!  I don’t really have a name for it, but the kids called it “Chew” when they were young.  Dub it what you will . . . it works. 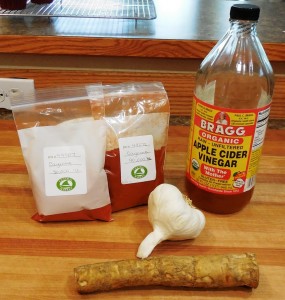 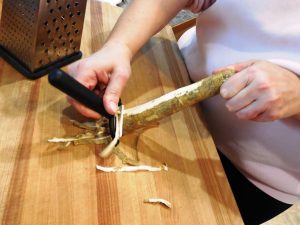 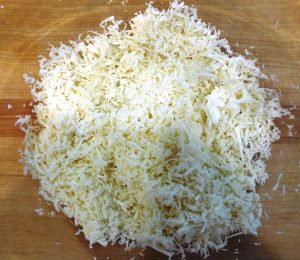 Grate the entire peeled horseradish root into a bowl, using the fine side of your box grater.  If you’re anything like me your eyes will water . . . a LOT . . . during this process.  It’s a good thing.  It means you have a nice, fresh, potent horseradish root. 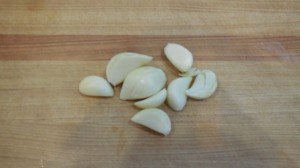 Mince several cloves of garlic into the bowl of horseradish.  This isn’t a set amount since garlic cloves vary in size.  I’d say 1 medium clove per 1/4 cup of horseradish.  Stronger isn’t going to hurt anything. 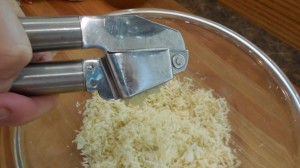 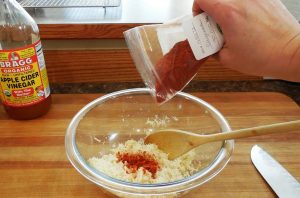 Here’s where it gets just slightly tricky.  Because horseradish varies in size, and as a result so with the garlic . . . the cayenne pepper amounts will vary accordingly.   Sprinkle in just enough to make the mixture pinkish.  It is better to err on the side of not enough and have to add more, than to add too much and feel like you can’t breathe after eating it. 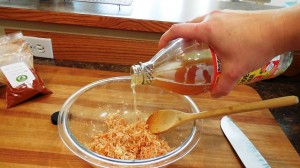 Drizzle in just enough apple cider vinegar to make everything goo together, but not enough to make it drippy. 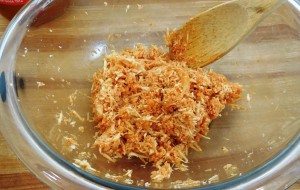 Once it is all stirred up together it should look something like this.  I got this batch slightly on the hot side, so it’s a little reddish vs pink.  The difference this makes is that it will be spicier. 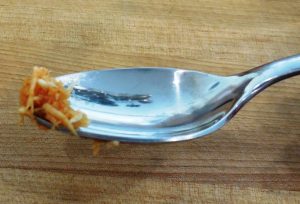 Above is a dose of the remedy.  Take this amount under the tongue, holding it there for about 30 seconds to absorb into the thin membranes and into your system faster.  Chew it up and swallow it.  Because this is spicy you may have to work up to the 30 seconds.   Doesn’t sound like long until you have something hot under your tongue!  Do this 3 times each day for about 5 days, or until all symptoms are gone.   Any leftovers can be frozen for future use.

***Special Note:  Make sure you have breath mints on hand, or nobody will be able to tolerate being around you!  The aroma sort of hovers like a garlic halo.  If vampire attacks were any worry before this remedy . . . they won’t be after you begin taking it. ***

All of the ingredients in this remedy are natural antibiotics, given to us in God’s pharmacy.  Garlic contains a substance called Allicin, which has anti-bacterial properties that are equivalent to a weak penicillin. The capsaicin in cayenne pepper has antibacterial properties as well, and and can help infections of the sinus and ears.  Horseradish has long been used for its antibacterial properties for upper respiratory issues, and apple cider vinegar is able to stop the growth of new bacteria!  Everything in this remedy works together to bring the system to a healthy place, in a healthy way.

2 thoughts on “Special Edition: Sinus Infections and Upper Respiratory Yuck Getting You Down? AMAZING Herbal Remedy To Make At Home”