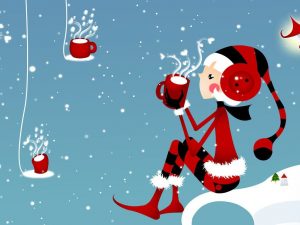 I am pretty glad it is Wednesday.  Of course, there is the fact that I get to be home baking today, and of course doing other things that need to be done, but I have a long list of things I want to accomplish today so that by the weekend Hubby and I can tackle the things we need to do together without the distractions of chaos all over the house.  The list is probably too long to accomplish everything on it, but I’m going to give it a good try. I’m a couple of days behind having my stuff done in time to have a calm and somewhat relaxing last week before Christmas, but it’s not as behind as it has been in previous years!  Here’s to having a day where I can the super woman my to-do list says I need to be.

Therefore, my brothers, I want you to know that through Jesus the forgiveness of sins is proclaimed to you. Through him everyone who believes is justified from everything you could not be justified from by the law of Moses.

Depending on which country you are in, Santa Claus is known by different names, some of which most of us are probably away. There’s Santa Claus, Father Christmas, Kris Kringle, Saint Nicholas, and Pere Noel off the top of my head, but that’s not all of the names he is known by.  I found a list on a great website called www.whychristmas.com and it’s pretty awesome to see all of these names!  Take a look and if you know any that aren’t on this list to their website and let them know a new one.  They were asking for people to do that and it would be a nice help to them.  Personally, I don’t see how there could be more, but anything is possible.

Have you ever noticed how difficult it is to keep kind thoughts in your head when the urge to smack someone sideways keeps coming upon you?  I am trying though – with everything in me!

Go Caroling – I’ve only been Christmas caroling a couple of times, and both of those times were back in high school with my youth group from church.  It was wonderful, fun and so rewarding as we wandered from house to house in a neighborhood with a lot of retired people, to see their happy faces as they stood in their doorways to listen to the classic carols we were singing for them.  It really filled my heart with a major case of the warm fuzzies!  Caroling was far more popular decades ago than it is now, but that doesn’t it mean it is a forgotten activity.  You still see it in all of the Christmas movies.  Makes me wonder how it is that I’ve never had carolers go by my house EVER?  Isn’t that sad? I know that school choirs and church youth groups go caroling more often than other groups, but that isn’t keeping other folks from trying it out in their neighborhoods.  Come on! Give it a try! Today is the day for it!  Liven up your street, put a smile on people’s faces, grab a group of friends and go caroling, followed by a nice, hot cup of cocoa.  I’m betting you’ll be happy you did! Interesting fact:  Caroling dates to the founder of the Catholic church’s Franciscan Order, Francis of Assisi.  He started the tradition of public singing of merry songs, instead of solemn ones.

Mudd Day – Have you ever heard someone say “Your name is MUDD!”?  I have.  I had no clue what it meant.  One, I had no idea it was an actual name!  The whole name that gave this saying its start was Samuel A. Mudd (Dec 20,1833 to Jan 10, 1883).  And two, what could he possibly have done that was so bad that even now, more than a century after his death it is still a saying with negative connotations? Well, helping out a guy who assassinated Abraham Lincoln would be the thing that started this one.  Samuel Mudd was imprisoned for life for medically treating John Wilkes Booth.  He was later pardoned by President Andrew Johnson, but his name had been pretty trampled ever since his sentencing.  Calling someone “mud” was already happening before Mudd’s error in judgment, but his actions did give the phrase “Your name is mud” a whole new low.

National Sangria Day – For years I would hear about Sangria from people who loved it, but had never taken the time to make any so we could give it a try.  Until this past summer. Oh, my goodness, it’s delicious!  In 1964 the World’s Fair introduced New Yorkers to many things, but one thing that was imported was pretty unforgettable.  Spain’s boozy punch made with red wine, brandy and chunks of fruit was pretty popular.  Here are a few recipes to try out to see if you like it.  It became a summer favorite for us on our camping trips this past year.

Well, I’m not going to be enjoying any Sangria today, but it does sound tasty.  That is more of a lazy day beverage for me and today is anything but that! I’ll probably keep the coffee and water going instead. Have a wonderful day! God bless you and I’ll see you tomorrow.