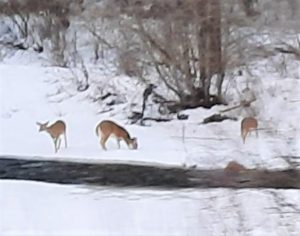 Pulling onto the road for our final trip to our new home was bittersweet in so many ways.  We had made multiple trips to transport our belongings, but those trips were different because we knew we were going back again. I had lived in this county and state for most of my life, and there were many things I knew I would miss – the incredible view of the sparkling canal, ringed by snow covered mountains; the music of the rain falling through the new leaves on the trees in the spring; the chatter of waves kissing the shore at the beach; the mournful sound of the foghorn at the lighthouse down the road . . . so  many things.  Mostly though, as we drove into our future, I left behind the only thing that TRULY matters in this life, under God and my husband . . . my family.  My parents, my daughter, son-in-law and grandson . . . though I didn’t see them all the time, they were close enough to see when the opportunity arose.  Each mile took me further away from them, and the tears flowed freely for quite a few of those miles as they took me further and further away.

Along with the tears, there were long periods of the drive when I was having deep discussions with God. He knows my heart, He is the one who showed me where I would someday live, and He also showed me all those years ago, that my parents and my daughter were also meant to be nearby. Rather than allowing myself to wallow in self-pity, I threw myself into prayer for God’s will to be done, in His time, in a way that would benefit His plan. I do not know when, I do not know how, but I know that someday the future I was shown will come to pass, but this temporary separation had to happen – the first step of many to bring us all together again.

I’m not going to lie – I am NOT someone who does long drives well.  I tend to want to fall asleep after a while, and this was trip 4. . . or maybe 5? . . . since this whole process started.  For this last trip I was following my husband, who was driving our motorhome.  I was driving his truck, pulling a cargo trailer, with the cat in her travel condo in the backseat behind me, alternately whining and howling for much of the trip.  Well, to be fair, she did sleep some of the way . . . I envied her after a few hours of trying to force my eyes to stay open. They burned from the crying and not getting much sleep the night before, so this whole staying awake while driving thing wasn’t easy!  By this step of the process, we knew exactly where the rest areas were, what the best fuel and bathroom stops were, and which parking lots were easiest to get into – and out of – while traveling in lengthy vehicles. This is good information to have!  We also knew which stretches of road that the Department of Transportation decided that travelers shouldn’t have options for going to the bathroom, pulling over to stretch, or obtain nourishment or rest. It was during these long portions of road with no places to stop, that I found myself with the air conditioning at full blast (in February), singing, followed by screaming and shouting at the top of my lungs, slapping myself on the face, arms and legs . . . doing everything I could to stay awake. There just weren’t any good places to pull over safely to take a break! It was with sighs of relief that we saw the familiar truck stop where we preferred to stop after so many miles of driving. The aches, creaks, cracks and groans of our backs, legs, necks  . . . well honestly, of every joint in our bodies . . . as we sort of stumbled out of our respective vehicles would have been funny if they hadn’t been so uncomfortable. It was a hurt that felt good at the same time. The stiff walk to the restroom, the return trip slightly more limber than the trip in, getting something cold to drink after hours of not wanting to drink much for fear of a bathroom emergency . . . we were in the last portion of the trip . . . we would be in the home stretch before we knew it.

And at last, we were descending out of the final mountain pass. I was wide eyed with wonder and beauty of the snow covered hills around me, and mind boggled at the clear, dry road ahead. Seriously, where I was raised, the mere hint of snowfall had people scrambling for bread, milk, beer and snack items, and sliding into the ditches off of roads that were built for rain run-off. For anyone not familiar with this concept, imagine pavement that is often wet with running water, freezing up and turning into a slide that goes straight into a ditch, over an embankment, etc.  Now imagine traffic trying to get from point A to point B, factor in inexperience driving in inclement weather and if we were REALLY lucky, wind. What I was seeing was a clear, bare road, not a hint of ice on the pavement! I saw roads that were maintained by an area that was so used to cold, snow covered winters that this was no big deal! I’d heard rumors of such a thing, but it was so far outside of my experience that I had to see it to believe it!

As we made the climb into the mountains where we were going to be building our cabin, the snow got a little deeper on the sides of the road and on the hillsides. A river meanders alongside the curving road, portions frozen over, the trees glittering with the hanging diamonds of ice that sparkled in the sun that hung in a vivid blue sky. The air was clean and pure, no pollution, no haze, no rainclouds on the horizon . . . the only things I had ever seen that were more beautiful than this were the faces of my children and grandchildren when I gazed into their eyes for the very first time. My heart leaped with joy that this is where God brought me to live, and anticipation of the time ahead when we would be reunited – sometimes to visit, and eventually to be close to each other again.  It will happen . . . I know it in my heart and soul as surely as I know that God put me here in the first place.

There was a slight delay in pulling into the driveway, as the road outside the turn was a solid sheet of ice – the first we had actually encountered along the way. I don’t know if you are aware of this, but motorhomes tend to not be the best vehicles to maneuver when on solid ice. You can put the parking brake on, but that doesn’t mean that the vehicle will stay where you parked it.  I was behind the motorhome, watching my husband walk to our family’s house to get the tractor to spread some gravel on the road to give him traction to drive. Apparently Moose (our dog) wasn’t too sure about what was happening, and began moving around inside the motorhome . . . and as I sat there watching, the motorhome began to slide . . . seemlingly all on its own.  Now, the good thing is there wasn’t far for it to go, but it could have been a little ugly if it had managed to get one side of it into a dip and tip over.  I’m sure my imagination is overly active – it probably wouldn’t have done that, but it was a bit disconcerting nonetheless. It all turned out, we managed to pull into the driveway and suddenly we were home. After months of planning, praying,  doubts, fears, hesitations and finally giving in to what we knew was the path we were to follow . . . we were here. And I wouldn’t have it any other way.

***The picture attached here was actually an accident of sorts!  On one of our trips to bring our belongings to the new place, I was randomly snapping pictures out the side window, hoping that I’d get a good shot of the river that was running alongside the freeway. When I looked at the pictures later, I realized I’d managed to catch 3 deer that were standing next to the river!  the picture is a bit blurry, but I feel like it’s special anyway and wanted to share it with you.