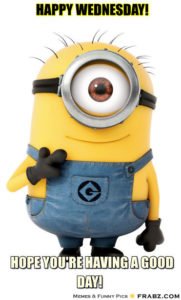 I have spent most of today doing research online for various things and just now realized that I hadn’t posted what I’d started early this morning. Sorry! The time just seems to escape me and is gone! It’s incredible how that happens.  I did learn a few new things and each time I learn something new I think I am getting a step closer to making decisions or steps to a better future. Knowledge does that, right? We are always better off with each thing we learn, so I can always feel good about that.

Ah, Sovereign Lord, you have made the heavens and the earth by your great power and outstretched arm. Nothing is too hard for you.
—Jeremiah 32:17

In the immense expanse of our universe, with its billions upon billions of stars, where our own tiny blue planet is but a small speck of sand on an inestimable seashore, God knows us each personally. Such knowledge it too wonderful to be true, and yet it is! God has shown us his love in Jesus to remind us that he not only knows us, but he cares for us and longs to bring us to himself.

People put a lot of importance on material things. I’m probably one of the worst with this. I wouldn’t go so far as to say I’m a hoarder, but I do hold on to things for sentimental reasons.  I have cards and letters that my Grandmothers sent to me, pictures and school papers from when my children were growing up, knick knacks that wouldn’t mean anything to anyone else, but that someone I love picked out for me, so it makes it important to me. I have a coffee cup that my Grandpa loved and used often that I keep up in the cupboard but don’t use often because I’m afraid of breaking it, and two tea sets from my Grandma that we would have tea parties with when I was growing up. If anything happened to any of these things I would cry like my heart was broken. Today I heard that sadness in my daughter’s voice when she called me to see if I had any extra cups that Grandpa used. She was one of the family who received one of his favorite cups and she used it almost every day. It kept him alive in her mind. Something happened and the cup got broken today, and it was hurting her heart. Unfortunately, I don’t have an extra, but told her Mom might. Turns out she does, so my daughter will get another cup. It made me think though – as much as we love the things that remind us of the ones we love, it’s the actual people who are important. If they are still alive, spend time with them when you can. Talk to them, create memories together, and appreciate them while they are here. By doing this, someday when they are no longer here on this earth we can bring out those memories and keep those loved ones alive in our hearts and minds.  Hold them close while you can. It’s important. 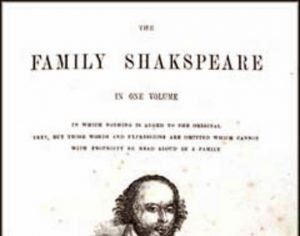 Bowdler’s Day – Could this be one of the original censors? I think so! Today is a day for those who wish to cleanse, or bowdlerize, things that they find to be offensive in works of art. Thomas Bowdler said, “Many words and expressions occur which are of so indecent a nature as to render it highly desirable that they should be erased.” Sort of sounds like many in our government lately, doesn’t it? They want to tell us what to eat, how to look, how big a drink we can get (glad THAT one was voted down finally in New York City), whether or not we can pray in public, etc. Sorry . . . I digress. Thomas Bowdler was born on July 11, 1754, and was a doctor before he began “extracting disease from text”. One of his main targets was Shakespeare, which he “cleansed” by removing what he decided was indecent. This resulted in 10 volumes of “The Family Shakespeare”. He even changed one of the most recognized lines from “Macbeth” from “Out, damned spot! Out I say!” to “Out, crimson spot!” (loses a lot of impact with that change, doesn’t it?) If you could remove words from our everyday language, would you? And what would they be? I know that I believe in freedom of speech. I don’t have to like the speech, but if I don’t like it, then I don’t have to listen. I can turn around and leave. With that said though, I would remove anything taking God’s name lightly, or as the Bible puts it, “in vain”. There’s absolutely no valid reason to bring shame on God’s name by using it in a negative and damning manner. He thought so, or He wouldn’t have included it with the 10 Commandments. You know, those 10 life rules that certain censors of free speech are working so diligently at removing from our courthouses, public squares, etc. 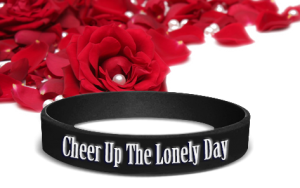 Cheer Up the Lonely Day – What a wonderful thing, having a day set aside to cheer up the lonely. I’m sure we all know someone who could use a little visit and a smile. The elderly, people who are shut ins, or perhaps someone who is really shy. If you take some time to cheer them up and give them a little company for a little while, then you’ve done a good thing! I used to work in a retirement apartment community. It was shocking to me how many people lived there and their children never came to visit them. I’d see them once when they moved their parents in, then no more until a holiday. It was so sad! That may be a good place to start – maybe drop in and visit at a nursing home or retirement complex – and give some time face to face with other people who could use a friendly smile and someone who is willing to just spend some time. This special celebration was created by Francis Pesek from Detroit, Michigan. His daughter said that he “was a quiet, kind, wonderful man who had a heart of gold. He got the idea as a way of promoting kindness toward others who were lonely or forgotten as shut-ins, or in nursing homes with no relatives or friends to look in on them.” He chose this day to celebrate because it was his birthday. What a wonderful way to show your caring for others.

Chik-fil-a’s Cow Appreciation Day – What a fun one! I really wish we had a Chick-fil-A around here! Today is the day, in the 1,700 + Chick-fil-A restaurants, that if you show up in black and white spots, cow bells and furry ears – or other cow related costumes, you get a free meal! If you wear a partial costume you get a free entrée. How cute is THAT? I would dress up like a cow in a heartbeat to participate in this one!

Day of the Five Billion – On this day in 1987 a baby born in Yugoslavia became the 5,000,000,000th person on the planet. I’m actually wondering how they can possibly know that, since many babies are born in 3rd world countries without birth certificates, doctors or hospitals? Interesting that they thought to pin point it to this particular baby. Apparently this day is observed by the UN and the “world” community to focus on the importance and urgency of dealing with the world’s population explosion. Here’s a thought, leave that to God, since He’s the one who is the author of life and each baby conceived. I am pretty sick of people trying to play God all the time. 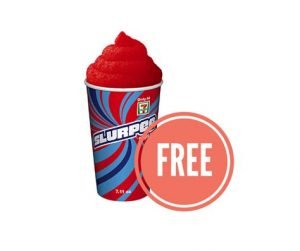 Slurpee Day / 7-11’s Birthday – This one is quick and simple – today is 7-11’s birthday! To celebrate they are giving away free Slurpee’s in some of their locations – I can’t promise all of them, since they may not all be participating. There’s something really delicious about an ice-cold Slurpee on a really hot day. Mmmm. . . I especially like the Coca Cola flavored ones. I haven’t had one in so long! Makes me wish that the 7-11 was a lot closer than it is. Not that I need all that sugar – but it does sound refreshing on a hot, hot, hot day. Of course today isn’t going to be all that hot, so I won’t miss it.

1792 – Robert Bailey Thomas publishes the first issue of the Farmer’s Almanac. It is now called the “Old Farmer’s Almanac”.
1804 – Former Vice President Aaron Burr kills Secretary of the Treasury Alexander Hamilton in a duel.
1979 – Skylab space station re-enters the earth’s atmosphere. Pieces land in the Indian Ocean and in Australia.

National Blueberry Muffin Day – Coffee may claim to be the best part of waking up, but we imagine many muffin lovers out there might argue that honor belongs to blueberry muffins instead. I’d honestly say they were a little off base, but if that’s how they feel I won’t argue it to their face. Now having a blueberry muffin WITH my coffee, that’s a different story. Here’s a lovely low-carb/keto blueberry muffin recipe from Peace Love and Low-Carb. I may have to give this one a try for when Miss B comes to stay with us for a week next month.

National Mojito Day – I love mojitos. Mmmmm, the delicious tart bite of the limes, the invigorating mint and the sweetness of the simple syrup . . . I’m not very good at making them, but my gosh, I love to drink them. The great news is that when switching to low-carb eating, you do not have to give up the delicious and refreshing treats like special occasion mojitos! Thanks to Carolyn Ketchum at All Day I Dream About Food, we can not only have our mojitos, we can enhance them with blueberries! Thanks Carolyn! 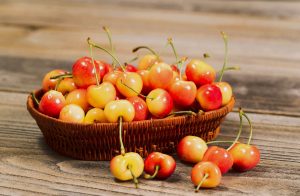 National Rainier Cherries Day – Rainier cherries are delicious. They are known as the “white cherry” because they have white, creamy flesh, and their skin is yellowish-red once they are ripe. They are one of the sweetest and tastiest of all cherries and can be a dessert all by themselves. A good Rainier cherry will be large and firm, and it will have the ripe yellow and red blush color. They usually have a little bit of discoloration, a little scuffing or some brown spotting on their skin, which often means that they have high sugar content. I never knew that! Avoid the ones that are soft, have wrinkled skin, are leaking and sticky or have visible decay. This delicious fruit is harvested late-June to early-August, but their peak is in June. Washington State (yeah!) is the largest supplier, but they are also grown in Oregon, California and some are imported from Canada and Chile. Here’s something pretty amazing! In Japan, Rainier cherries often sell for a dollar each! Makes the $5.98 per lb not seem QUITE so bad.

I’d better get myself moving! I am nowhere near done with what I wanted to do today. Hopefully I can cram extra in tomorrow! Gotta run! God bless you and I’ll see you tomorrow!

2 thoughts on “There Are So Many People Who Are Lonely In the World – Take Some Time to Cheer Someone Up!”