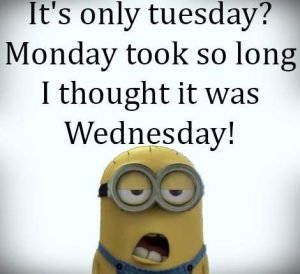 Good Morning and a happy Tuesday to everyone! The sky is a little overcast, but that’s OK. If we have to be at work anyway, it doesn’t much matter what it’s doing outside, does it? Sunshine does make us smile, but at least when it’s cloudy we aren’t pining away to be somewhere else . . . or not quite as much.  I don’t think I mentioned that I really like it when the schools are on break. The traffic is so much better, both in the mornings AND the afternoons! Yesterday’s drive to work was lovely, and I bet today’s will be pretty nice too.  That’s right high school drivers and all of the helicopter parents out there – sleep in and leave the roads nice and quiet for the people who are heading to work.  We appreciate it!

Let us fix our eyes on Jesus, the author and perfecter of our faith, who for the joy set before him endured the cross, scorning its shame, and sat down at the right hand of the throne of God.

“He drives where he looks, he drives where he looks!” That statement made by a disgruntled wife about her husband really spoke the truth. He invariably would turn the steering wheel in the direction he was looking. This principle is also true of each of us and our life: “Lives where she or he looks!” That’s why it’s important to fix our eyes on Jesus! Our life will follow where we look! Let’s make sure that our gaze is on Jesus. 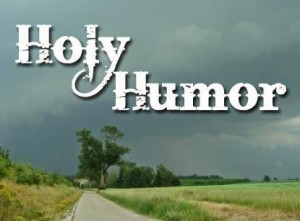 Three guys and were fishing on a lake one day, when Jesus walked across the water and joined them in the boat.

When the three astonished men had settled down enough to speak, the first guy asked humbly, “Jesus, I’ve suffered from back pain ever since I took shrapnel in the Vietnam war… could you help me?”

“Of course, my son,” Jesus said, and when he touched the man’s back, he felt relief for the first time in years.

The second man, who wore very thick glasses and had a hard time reading and driving, asked if Jesus could do anything about his eyesight.

Jesus smiled, removed the man’s glasses and tossed them in the lake. When they hit the water, the man’s eyes cleared and he could see everything distinctly.

When Jesus turned to heal the third man, the guy put his hands up and cried defensively, “Don’t touch me! I’m on long-term disability!”

I realize that serving sizes are intended to show what a portion as NEEDED is, but seriously, following recipes can be a bit of a let-down! Last night I made a great dinner. It said it served 6. Um. OK. I had what I considered to be a modest portion, Hubby had 2 – that makes THREE servings. So much for lunches today.  No wonder the frozen, convenience food leaves us so hungry for more. It’s not enough to fill anyone!

Don’t Go to Work Unless It’s Fun Day – Oooooh maybe this is your day to sleep in!  When this day falls on a Saturday or Sunday when you are usually off work, it makes celebrating it easy.  If it happens during the work week though, you may need to plan ahead and take a vacation day, otherwise your boss may have an issue with it.  Wouldn’t it be nice to be able to wake up and just decide to stay home if you wanted without any repercussions?  Unless your job is fun, then you may not want to celebrate this one.  For the people who are employers – to help maintain attendance at work today, do something that will make the day fun!  Just keep in mind – unless you get permission from your boss, don’t celebrate this one. All of this is great, but you wouldn’t want to lose your job over it.

Find a Rainbow Day – I remember as a child hearing the story of Noah’s Ark and God’s promise not to destroy the earth in a flood again.  He placed the rainbow in the sky as the reminder of this covenant.  From that time on, I must have been 4 or 5 when I actually was able to make sense of the story in my little mind, I would see a rainbow and tell God thank you for the promise and the beautiful colors of the rainbow.  Even now I am awed by the sight of one.  When I was in about the 4th grade my science project was about creating rainbows using prisms and a light source.  At one point I had little tear drop crystals hanging in windows watching the beautiful colors dance on the walls.  For anyone who cannot remember the order of the colors in the rainbow, there is an acronym that is often used . . . “Roy G. Biv” – one of the acronyms I have heard. Each letter of the name stands for a color of the rainbow –  in order … red, orange, yellow, green, blue, indigo and violet. (Although a true rainbow actually contains colors along the entire spectrum.)   Today, if your weather permits, keep your eyes open for that beautiful promise from God in the sky.  It’ll lift the spirit no matter how the rest of your day is going.

Pony Express Day –  On April 3, 1860, the first Pony Express mail, traveling by horse and rider relay teams, simultaneously left St. Joseph, Missouri, and Sacramento, California.  On April 13th, 10 days later, the westbound rider and mail packet completed the approximately 1,800 mile journey and arrived in Sacramento.  He beat the eastbound packet’s arrival in St. Joseph by 2 days and set the new standard for speedy mail delivery.  The Pony Express was short-lived and unprofitable, but it captured America’s imagination and helped win federal aid for a more economical overland postal system.  While the Pony Express was active it contributed to the economy of the towns on its route, serving the mail service needs of the American West in the days before the telegraph or an efficient transcontinental railroad.  It debuted at a time before radios and telephones, when California, which achieved statehood in 1850, was still very cut off from the eastern part of the country.  Letters that were sent from New York to the West Coast traveled by ship, which usually took at least a month, or by stagecoach on the Butterfield Express overland route.  This took from three weeks to many months to arrive.  When compared to the snail’s pace of the ship or stagecoach methods, the Pony Express’ average delivery time of 10 days seemed really fast!

The Pony Express Company was the brainchild of William H. Russell, William Bradford Waddell and Alexander Majors, owners of a freight business.  It  was set up with over 150 relay stations along a pioneer trail across what are now the states of Missouri, Kansas, Nebraska, Wyoming, Colorado, Utah, Nevada and California.  Riders were paid about $25 each week and carried loads up to about 20 pounds of mail.  Every 75 to 100 miles riders changed, horses were switched out every 10-15 miles.  Among the riders was the legendary frontiersman and showman, William “Buffalo Bill” Cody (1846-1917).  It is said that he signed on with the Pony Express when he was 14 years old.  The company’s riders set their fastest time with Lincoln’s inaugural address, which was delivered in just less than eight days.  The initial cost of Pony Express delivery was $5 for every 1/2 oz of mail.  The company began as a private enterprise and the owners had hoped to gain a profitable delivery contract from the US Government, but it never happened.  With the start of the first transcontinental telegraph line in October of 1861, the Pony Express stopped operating.  The legend however, of the lone Pony Express rider galloping across the Old West frontier to deliver the mail, lives on today.  So cool!  Happy Birthday Pony Express Company.

Tweed Day – This one could be a celebration of a couple of things.  It could be all about the warm, fashionable woolen clothing that originated in Scotland that seems to always be in fashion!  Tweed keeps you warm and it looks good.  It could also be celebrating the birthday of a corrupt New York City politician named William Magear “Boss” Tweed” who was born on April 3, 1823.  Boss Tweed was a U.S. Senator and a NY State Senator.  His claim to fame was being convicted of being corrupt and using his power for personal gain, stealing millions of dollars from NYC.   Now, I’m betting since this wasn’t a nice guy that today we are actually celebrating Tweed suits because seriously, do we really want to celebrate the birthday of a crook?  Maybe his family might, but not the rest of us. As a side note, I also remember that my Grandma used to wear a powder called Tweed.  She’s the only person I ever knew who wore it, which made it special because it was her.  With every hug, we were wrapped up in the warmth of her love, and the scent that was uniquely her.  Gosh, I miss her SO much.

Chocolate Mousse Day – If you have your taste buds all set and craving a decadent sweet treat, this one would definitely be a good one to try!  If you’ve never had chocolate mousse, it is a thick and creamy airy substance that is rich, delicious and satisfying. Julia Child is famous for having created the perfect Chocolate Mousse that included dark-brewed coffee, butter, bittersweet chocolate, eggs, dark rum and vanilla. Sounds complicated!  The French word Mousse means foam and that is a really good description of this dessert, since when it is prepared properly, it is light and frothy, or creamy and rich – depending on how you prepare it.  The origins are largely unknown, but it IS known that it was popular in 18th century France, though the first time it showed up in written record was at an exposition in New York City in 1892.  A Housekeepers Column in the 1897 edition of the Boston Globe ran a story featuring the recipe, but when made it turned out more like chocolate pudding, rather than what many of us have tried as a chocolate foamy treat. To create the mousse, egg whites have to be whipped at a consistent pace for a long time, so consistency in attempts to create a mousse didn’t really happen until the electric hand mixer was invented.  Now that I have said all of THAT, there is an easier way.  As you know I’ve been doing my best to convert our household to a low-carb way of eating, and that I am a BIG fan of food blogger, low-carb genius and cookbook author Carolyn Ketchum.  She has this recipe linked here for “Almost Instant Chocolate Mousse” and I can tell you it is EASY, it is DELICIOUS, and it definitely cures the craving for a sweet, chocolate treat. The fact that it is healthy too is a HUGE bonus!

I need to get out the door. Yesterday I was surprised by a frozen windshield. I can’t tell if what is out there is icy or just wet, but I’m not taking any chances! God bless you and I’ll see you tomorrow!