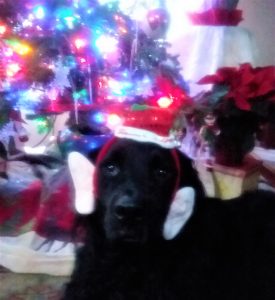 The countdown to Christmas continues, and though I am nearly done with most of our shopping, hubby did most of the wrapping and the house has been decorated for weeks, there seems to be a plethora of details that keep coming up that are keeping things busy. I should have been on my feet doing things for the last two hours but got caught up finding the last 2 gifts on Amazon, and now, the only things left to buy are stocking stuffers. Mom and I are supposed to go to town next week one night after work, so I’ll get those then. Today I am doing some more wrapping, sorting through the stocking stuffers, and spending the weekend baking so I can get the packages that I ship out ready for Monday. (It could be just me, but I don’t think Moose was really enjoying our elf moment.)

God sent the angel Gabriel to Nazareth, a town in Galilee, to a virgin pledged to be married to a man named Joseph, a descendant of David. The virgin’s name was Mary. The angel went to her and said, “Greetings, you who are highly favored! The Lord is with you.”

Wow! Such a familiar sentence packed with emotion. An angel comes to Nazareth to visit and speak with a young woman engaged to be married. Before the history shattering news is announced, she is given one key reminder that will be truer than she could imagine, “The Lord is with you.”

Throughout the Christmas season we all hear the song the “12 Days of Christmas”, we hum along, sometimes it gets annoying, but it is all part of it, right? Many of us have always thought that the 12 days referenced were the days leading up to Christmas, but that couldn’t be more wrong. We also have thought that the gifts in the song were given by a lovelorn guy with a bird fetish, right? Well, we couldn’t be more wrong about that either!  Let’s find out what it is all about.

First, when are the 12 days of Christmas? Contrary to current, popular thought, the 12 days start on Christmas Day and go through January 5th. Why, you ask? It all starts on Christmas Day, the day we celebrate the birth of our Lord and Savior, and end on the Eve of Epiphany. The days in between cover several different religious and secular holidays, including St. Stephen’s Day, Boxing Day, Childermas, New Year’s Day and Twelfth Night.

And the song? Well, a lovelorn bird guy couldn’t be further from the true origins.  “The Twelve Days of Christmas” is an English carol. During the time between 1558 and 1829, Roman Catholics in England weren’t allowed to practice their faith out in the open. During this time period someone wrote this song as a learning tool, or catechism song, for young Catholics.  There are two different levels of meaning, the surface one that we all thought the song was about, and a hidden one, known to members of the church.  Each part of the song is code for a religious reality that kids could remember. The true love in the song isn’t a boy or girl, but Jesus Christ, because love in its truest form was born on Christmas Day. The partridge in the pear tree also represents Christs because the bird is willing to sacrifice its life, if called upon to do so, to protect its young by pretending to be injured to draw away enemies from its young.  Here is the breakdown of the song by Ann Ball in her book “Handbook of Catholic Sacramentals”:

The Partridge in the Pear Tree is Jesus Christ.

The two turtle doves were the old and new testaments in the Bible.

The three French hens stand for faith, hope and love.

The four calling birds are the four gospels: Matthew, Mark, Luke and John.

The five golden rings represent the 1st five books of the Old Testament, which describes man’s fall into sin and the love of God in sending us a savior.

The six geese-a-laying stand for the six days of creation.

The 8 maids a-milking are the eight beatitudes.

The 10 leaping lords were the Ten Commandments.

The 11 pipers piping stand for the 11 faithful Apostles (remember the 12th apostle betrayed Jesus for 30 pieces of silver).

And finally, the 12 drummers drumming are symbolic of the twelve points of belief in the Apostles Creed.

That puts it all in a new perspective, doesn’t it? 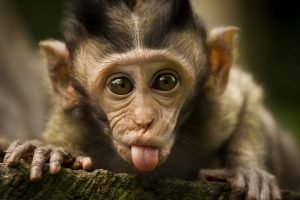 Monkey Day – So today is a day to celebrate all things primate – it’s a chance to study them, act like them, watch movies about them, etc.  The reason for this celebration isn’t very clear.  There are a variety of theories though.  Some say that it began as a way to raise awareness of simian species and habitats.  Some say that it was a “scientific backlash” to all of the religious holidays during December – more like a slap in the face, if that’s what they were trying to do. I have no personal issue with celebrating primates if the reason is to bring attention to their species and habitats – they are fascinating creatures and do deserve their own day on their own merit.

Official Lost and Found Day – This one escaped my radar, but this celebration was set up and officially registered by a site called Lost and Found – how fun!  They don’t blog about it much, but they recognized that each year people lose millions of things – or find them.  Some people never find what they’ve lost, and some people never find the people who belong to the things they have found.  This celebration, however, is a wonderful time to focus on connecting the items with the people! I like it! 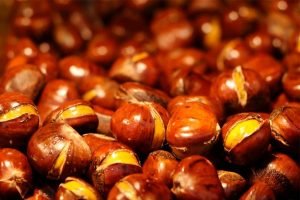 Roast Chestnuts Day – Whenever we watch Christmas movies that are set on the east coast and in the cities, we see street vendors with carts, in which they are roasting chestnuts. I’d never had a chestnut until my kids were already born, and I enjoy them, but found that they are quite a bit of work to prepare and eat, and often when I’ve peeled the outer shell off, the inside soft nut is moldy. I’m not sure why – maybe they are picked too soon, or maybe they have a really high moisture content, which would make sense because the meat is very soft. The ones on TV show people just buying a bag and eating them without peeling, so those vendors must do the work for the customer ahead of time. I’d like that a lot more! This time of year, you can find them in the grocery store and may want to give them a try, if you haven’t. Take each nut, cut an X in the skin, put them on a pan and roast them in your oven for 15-20 minutes at 425 degrees. The skin around the cuts should start to curl out a bit.  Take them out of the oven, put them onto a towel, twist the towel up tightly around the nuts, forming a “handle” with the ends of the towel, and squeeze the nuts tightly. You should hear a crackling sound. Once they are cool enough to handle, peel off the shell, and enjoy. I like them while they are still warm. Now I’m hungry for chestnuts!

National Biscuits and Gravy Day – Who loves Biscuits and Gravy??? I do! I do! What’s not to love? Flaky buttermilk biscuits, smothered in creamy, spicy/hot with a touch of sweet sausage gravy on a cold day is an amazing breakfast. It’s actually amazing all year long and we always enjoy it while we are camping. It’s actually a dish with a humble history, started during the Revolutionary War when food was scarce. It stuck to the ribs, filled the tummy and could be made with the drippings and leftover bits from whatever meat was on hand. 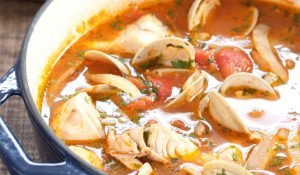 National Bouillabaisse Day – Have you ever had Bouillabaisse?  Do you know what it is?  It is a tasty Mediterranean fish stew or soup.  It is believed to have originated in Marseilles, France, and is extremely popular all around the Mediterranean.  It is a specialty in ports across the region.  The fish in this stew should be all white fillets, and recipes call for a variety of fish, including cod, snapper, flounder, halibut, sea bass, monk fish and others.  Celebrate this one with a cup or bowl of this tasty stew.

I’ve spent the morning flitting here and there around the house, cleaning out stuff that needed to be tossed out of the fridge, gathering the gifts I need to wrap, moving things here and there, writing to you and not getting a LOT done in one spot, but getting bits and pieces done here and there. I admit the wind outside is a little distracting and Moose goes bonkers every time a gust moves the wreathe on the door and makes a bumping sound.  May this day go forward with no wind damage or loss of power. I have too much to do today to deal with doing it in the dark.  I’d best get finished. God bless you and I’ll see you tomorrow.